MANILA, Philippines—Five publicly listed companies and six trading participants which have shown excellence in corporate governance while doing business in the Philippines were honored at the 2014 Bell Awards of the Philippine Stock Exchange. 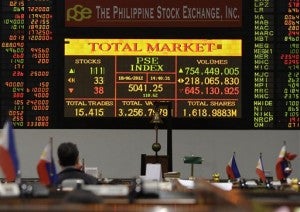 “We have indeed come a long way as a market when measured by the big leap in corporate governance scores. We recognize there’s still a long journey ahead as we need to catch up with our peers in the region for corporate governance best practice execution,” PSE president Hans Sicat said during the awarding ceremonies.

“Our past and present Bell awards winners have shown that going forward beyond the minimum standards for corporate governance is something easy. At PSE, we dream of the day that all listed companies and trading participants will at one point be conferred with the awards,” Sicat said.

PSE chair Jose Pardo said he agreed that governance and leadership were the “yin” and “yang” of a successful organization and that these two ingredients were necessary to “strike a balance” in business. He said many of the companies at the Bell Awards had achieved such balance. “I commend for striving to uphold the interest of shareholders especially the rights of minority and choosing leaders who can steer your company to greater heights,” he said.

Securities and Exchange Commission chair Teresita Herbosa, who chaired the Bell Awards’ board of judges, told reporters that the PSE’s Bell awarding was a very good project. “We support it wholeheartedly. It’s a very rigid process. We noticed that more companies are really trying to comply and adopt really good corporate governance standards and practices and it gets tougher every year.”

Herbosa added that the PSE was in the best position to give out the corporate governance awards, being the operator of the bourse where all of these listed companies were trading and where the trading participants were members.

Death came before COVID-19 test results for man in Tacloban