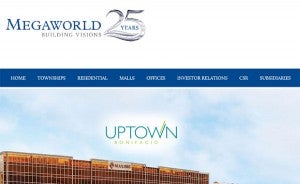 Property developer Megaworld Corp. chalked up a record-high net profit of P19.03 billion in the first nine months, nearly triple the level in the same period last year, on the back of one-time gains from the consolidation of the group’s property units.

The nine-month net profit marked a 192-percent jump from P6.52 billion last year although this year’s level included P11.62 billion in non-recurring gain from the acquisition and sale of a subsidiary and associates.

“We are confident that Megaworld can achieve another record year for 2014 as we further expand our township developments all over the country,” Megaworld chair and chief executive Andrew Tan said in a statement.

Megaworld’s rental income from its office developments and lifestyle malls surged to a record P5.2 billion in the first nine months, 20-percent higher than the level last year.

As an indicator of future revenue growth, Megaworld and subsidiaries reported P70.2 billion in reservation sales in the first nine months, up by 11 percent year-on-year.

The non-recurring gain of P11.62 billion this year was a result of the consolidation of Tan’s real estate companies under Megaworld last June. Megaworld bought the 49.2-percent stake in Geri held by parent firm Alliance Global Group Inc., initially raising its interest to 74.96 percent but eventually increasing this further to 80.4 percent after the tender offer to minority shareholders.