Half of all stars may lie outside galaxies 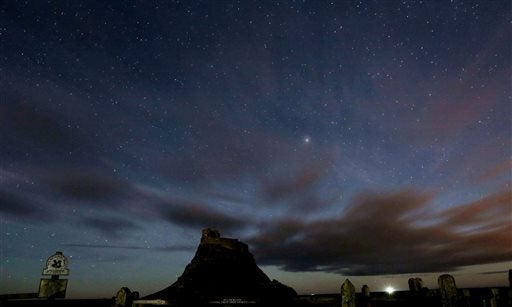 CAPE CANAVERAL, Florida  — The universe may be full of reclusive stars — not washed-up Hollywood stars, but the kind lurking deep in the cosmos.

Scientists reported Thursday that as many as half of all stars may lie outside galaxies.

Individually, these lonesome stars are too faint to detect. But together, they create a hazy background of fluctuating near-infrared light. A team of astronomers from the U.S., Japan and Korea say the diffuse glow appears to be from stars booted out of their galaxies by mergers and collisions.

The measurements by Michael Zemcov of the California Institute of Technology and his colleagues were made on two suborbital rocket flights, launched in 2010 and 2012 from New Mexico, and validated by NASA’s Spitzer Space Telescope.

NASA program scientist Michael Garcia said this diffuse glow between galaxies is as bright as all the known galaxies combined, and is redefining galaxies. Instead of having sharp edges, galaxies may spread out like a starry web, connecting all the galaxies together.

“Traditionally, we’ve talked about galaxies as disks or sometimes spheroids that have a finite extent. They run out of stars and gas at a certain radius,” Zemcov told reporters. While scientists previously have known about these halos around galaxies, “these halos seem to be extending farther out than we thought and is responsible for more light than we thought.”

Details of this Cosmic Infrared Background Experiment — CIBER for short — appear in Friday’s issue of the journal Science.

More CIBER flights are planned for better measurements; there have been four to date.