Entrepreneur profits from love of fruitcakes 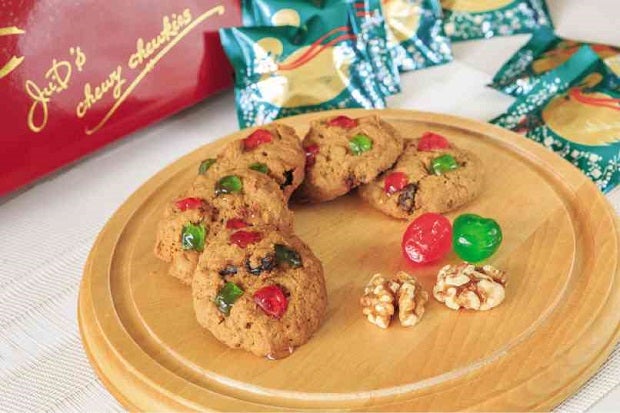 Ju.D Lao (yes, that’s how she spells her name) loves to travel.

As a child, she would visit her godmother, Emma Cua Locsin, in Iloilo, where she would get to taste fruitcakes sent from the United States during the holidays.

Back in those days, imported food was a luxury. And among those in the more affluent set, fruitcakes were very precious.

These US fruitcakes were full of spices, unique liquors and sweet glazed fruits.

“Eating them with my godmother was both an honor and an act of bravery,” she says, noting that the US-made delicacies were not easily accepted by the local palate.

Traveling to Zurich in the summer of 1975, however, Lao was introduced to a different kind of fruitcake.

Along with a delicious five-course meal, a plate of fruitcake a la mode was served as dessert.

Lao says it was the best fruitcake she ever tried then—a slice of moist cake, packed with wine-cured slices of orange, cherries, raisins and walnuts that melt in your mouth, blanketed by the warmth of brandy. 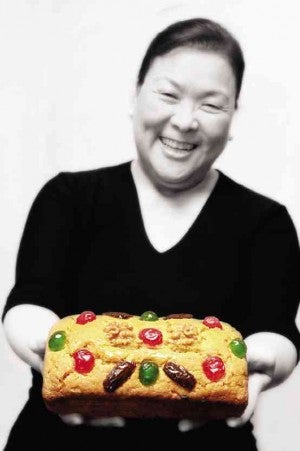 “I had never tasted anything like it,” she says. “It was so good that I wanted to share the experience with people back home.”

Upon returning to Manila, Lao began experimenting with all sorts of fruitcake recipes—usually European—that called for ingredients that had to be imported from abroad.

“I’ve never attended any cooking classes, but I love to read cook books,” she says of her passion for food, especially baking. “I do a lot of experiments on recipes that catch my fancy. And since I’m from a big family, we’re never short of guinea pigs or, should I say, brave and curious souls. Maybe I love to share or maybe I like to see happy faces once they tried my cooking.”

After months of hard work in the kitchen, she was able to come up with a recipe that attracted the attention of family and friends.

She made time to design her own brand and packaging and, come the holidays of 1975, Lao started selling her first batch of Ju.D’s Fruitcakes.

“I started selling these fruitcakes at P50 for a two-pound loaf,” she recalls.

At that time, the Philippine population stood at 35 million, and the average daily wage was just slightly over P100 per day. That year, 1975, was also the first year that the government had mandated the present practice of paying 13th month wages to employees. So, her timing was good.

Lao’s suppliers then were all to be found in Cartimar in Pasay City, since these were the ones who sold most of the imported PX (post exchange) goods. She had to go to Divisoria and Quiapo every now and then to buy fresh eggs in bulk.

“It was not easy,” she says of the time. “Imported ingredients were scarce. Sometimes the imported walnuts were stale so you had to go there yourself to choose the best. There were rotating power outages, so you had to adjust your kitchen’s operating hours.”

Add to that, Lao says, was the steady decline of the value of the peso, which made imported goods more and more expensive each holiday season. They also had to struggle with various natural calamities that had hit the metropolis.

The research and development phase of each fruitcake recipe, Lao explains, involves a lot of trial-and-error work.

“The first one was really hard. There were no cookbooks regarding this, and no Google to [turn to],” she says. “I would say [it took] maybe six months. It was hardest for the Ju.D Blue, which is coffee-flavored fruitcake. We had to source for the Blue Mountain coffee flavor and had to have the right liquor to age the fruitcake.”

That endeavor took her eight months. And the improvements never end. Nowadays, she says, she is focused on experimenting with and perfecting her cookies, which she describes to be a “big challenge” for her.

And while engaging in her passion, she makes sure to try to help the less affluent, too.

“Through the years, our workforce has been composed of neighbors’ helpers; out-of-school youth, or parents from schools who are in financial need but cannot take regular jobs,” she explains. “We only sell fruitcakes during Christmas season, and we cannot afford to hire regular employees. So, this arrangement has been a win-win situation for all of us.”

A few years back, she recalls, there was a group of young ladies from the El Shaddai choir who came to help out. From time to time, she adds, “they’d burst out singing while they were working … That was a very lovely and memorable Christmas for us.”

She recalls telling her niece once that, although the fruitcake business is seasonal, there isn’t a single day of the year that she does not think of her fruitcakes, and how to improve on them for the coming holiday season.

One such innovation came in the 1980s when she came out with fruitcake cookies which she has since called “Chewy Chewkies.” The children of her customers loved them because they tasted like fruitcakes, but without the brandy.

More recently, she came out with a whole range of petite cookies for the younger generation, and a set of vegetarian cookies for those who are health conscious.

This Christmas will be Ju.D Lao’s 39th fruitcake season—not bad for something that started almost by accident.

Read Next
‘Now is the best time to invest in PH’
EDITORS' PICK
COVID-19 cases in PH pass 3.2 million mark with 37,154 new cases — DOH
Metro Manila’s daily COVID-19 growth rate drops to 2% — Octa Research
SMDC’s Bloom Residences: A master planned community that cares for your health and wellness
Upsilon, Unilever give ‘real talk’ on climate change crisis
Over 3 Million worth of prizes to be won at Smart Padala’s SENDali Manalo Promo!
Novak Djokovic loses fight against Australia deportation
MOST READ
‘Not my loss’: Did Kris Aquino just comment on her breakup with Mel Sarmiento?
Ivana Alawi tests positive for COVID-19, urges public to comply with health protocols: ‘No one’s above the law’
Thailand records first Omicron death
Novak Djokovic loses fight against Australia deportation
Don't miss out on the latest news and information.