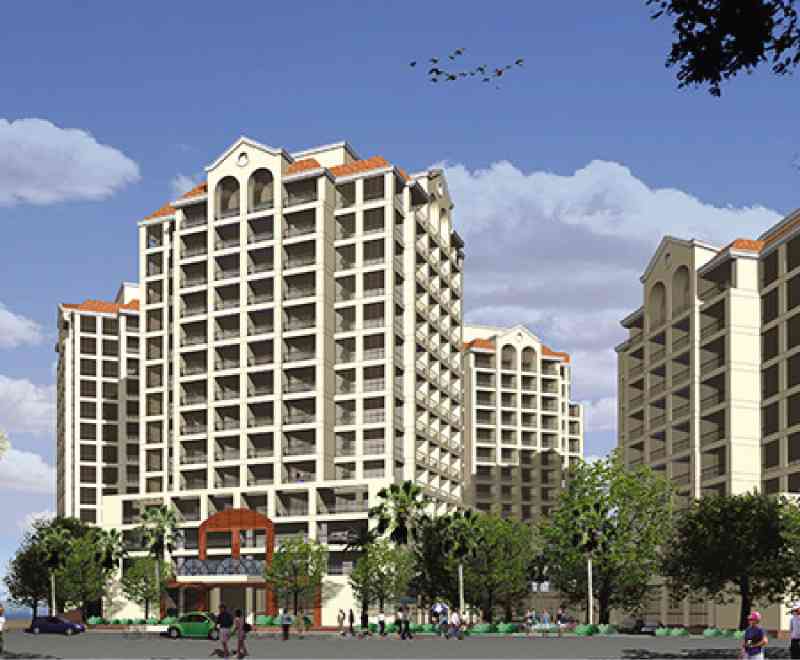 LA MIRADA Cebu is a 15-story condominium with Spanish-Mediterranean architecture and with 152 units. Photos from www.stalucialand.com.ph

Diversification was the strategy Sta. Lucia pursued when it started its vertical development projects. Known for horizontal projects and four decades of experience, Sta. Lucia is now adding middle-rise condominiums and condotels to its property offerings.

This was followed by the nine-story Sotogrande Hotel and Resort in Cebu. A three-star facility, the first six stories of Sotogrande comprise the hotel. The remaining three floors make up the residential units.

Succeeding vertical projects were La Mirada Cebu, a 15-story condominium with Spanish-Mediterranean architecture and with 152 units; La Breza in Quezon City, a 22-story tower with 250 studio, one-bedroom and two-bedroom configurations; and Splendido Taal Towers, a 12-story quad condominium towers. The facilities of the Taal Golf and Country Club serve as the centerpiece of the towers.

Other Sta. Lucia vertical developments are East Bel-Air, an urban residential development comprised of six midrise buildings, the first two of which are Bel Air and Stradella; and Neopolitan Condominiums, a nine-story, nine-tower residential, corporate and leisure landmark on Mindanao and Regalado avenues, Quezon City, with Tower 1 and Sotogrande (Katipunan) as the first two towers.

Its two other verticals are Orchard Towers, a cluster of three residential towers, a condotel and a commercial building on a one-hectare property in Manggahan, Pasig City; and Arterra Residences, a multibillion-peso 20-story condotel project at the tip of Punta Engaño in Lapu-Lapu City in Cebu.

Sta. Lucia Realty and Development Inc. president and chief executive Exequiel D. Robles said: “Our company has forged joint-venture agreements with the country’s top corporations that own large large tracts of land so it could focus on development and not on land acquisition. Among them were RFM, Hacienda Luisita, Dizon Corp., Atlanta Corp. and Fil-Estate Land Inc.”

SLI subsidiary Sta. Lucia Land International established offices in four countries—Singapore, United Kingdom, Dubai and United States—where many Filipinos work and live. Its Australia office will be opening this year. About half of total SLI sales comes from the international offices.

Sta. Lucia Homes Inc. is the construction subsidiary of Sta. Lucia Realty and Development and Sta. Lucia Land Inc. It offers lot owners with discriminating taste exclusive and extensive designs. Its personnel provides a full line of services that includes facilitation of permits, documents and loans.

Sta. Lucia has an excellent track record: more than 220 real estate developments all over the country and over 40 years of real estate experience. This major key player in the real estate industry has become a formidable force to reckon with.

Today, SLI is fortifying its presence in eastern Metro Manila area with Sta. Lucia City, an integrated urban hub hinged on a township concept. The hub allows residents to enjoy the benefits of community living with all the conveniences of an urban center.

Monte Carlo and Santorini (condotel) are the first two of five gleaming towers in the condominium complex. They bring to life the vibrant energy of famous European tourist hotspots, echoing the classic style and aesthetic of the Mediterrean cities.

Sta. Lucia City is building on its flagship mall Il Centro, an urban lifestyle hub that will serve as its centerpiece. Il Centro will showcase a unique mix of lifestyle, retail and service establishments that uplifts the image of a once-staid and convenient shopping complex into a vibrant, trendy community.

This year, eight projects have been started by the company to sustain its growth momentum. These are SotoGrande Hotel Suites, a 15-story condotel in the 60-hectare masterplanned project in Davao Riverfront; three new joint-venture projects (two in Dagupan, Pangasinan and one in Cainta, Rizal, involving 7.7 hectares and 8 hectares, respectively; and three new land acquisitions—two in Batangas City (9.3 and 3 hectares) and one in Taytay, Rizal (6.3 hectares).