(We are featuring property titans-men and women who have stood out in the crowd and done their industry proud.)

Property plutocrat with a larger stake in Megaworld, builder of apartment complexes doubling as small cities. Big into brandy, too: His Emperador Distillers went public last year and agreed to buy Scotchmaker Whyte & McKay for $720 million in May. Fortune extends to 408 McDonalds restaurants in the Philippines (owns franchise via Alliance Global conglomerate) and Resorts World Manila.”

This is how Dr. Andrew L. Tan is described by Forbes in its website. His personal wealth as of August this year is estimated at $5.1 billion, the country’s 4th richest man. His source of income is diversified and self-made, according to Forbes.

A Filipino citizen, he is married to Katherine with four children—Kevin, Kendrick, Kester and Kara.

In his speech during Megaworld’s silver tie gala that ended its silver anniversary celebration this year, Tan reminisced how far the firm has come: “When I founded Megaworld 25 years ago it has only five employees including myself. Today, the Megaworld group employs over 5,500 people.” 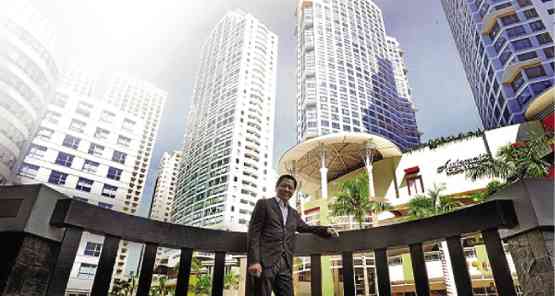 TAN with Eastwood as the backdrop. Eastwood City is the country’s first Peza-accredited IT park. AUGUST DE LA CRUZ

Stressing the company’s growth and the many milestones they celebrated, Tan attributed their success to their customers—the more than 100,000 homebuyers who regarded Megaworld properties their best choice of investment.

According to him, Megaworld is grateful for the unwavering support of the 126 BPO (business process outsourcing) companies now holding their offices in its buildings and the more than 1,500 retail partners located in its different lifestyle malls.

President Aquino, who was the honored guest at Megaworld’s 25th anniversary celebration at Marriott Hotel in Resorts World Manila, Pasay City, shared with the attendees what he believes to be Dr. Andrew Tan’s secret—what allows him to consistently achieve success. He identified this secret as Tan’s perseverance, his patience and his compassion.

The President said the complete lack of self-entitlement is what he has always admired in Dr. Tan—the kind of humility that truly should be replicated.

According to him, some very successful people who, once they reach the pinnacle of their chosen profession, begin believing that they deserve to be treated better than others. “Andrew, on the other hand, is the complete opposite. He is always graceful in his success, never bitter in defeat and he has never forgotten his beginnings.”

Born in Fujian, China, Tan moved with his family to Hong Kong where they occupied a tenement apartment with four other families. The tenant families shared one bathroom and one concrete table for their cooking stove. The corridor was even leased by the apartment owner to another family.

Then the Tans migrated to the country in the ’60s. They lived in a small apartment in Sta. Cruz, Manila. Andrew’s father worked in a transistor radio factory to support him and his brother.

Tan chose to walk to school instead of taking public transport from their apartment to save money. To help his family, he started out as a salesman with a small table of watches, tutored kids in math and worked as import assistant in a Chinese-owned firm. He imported appliances and sold them to the appliance stores.

Tan pursued his dream of having his own business with passion. His dream of owning a small grocery did not come  true. Instead he established a small liquor factory, Consolidated Distillers of the Far East Inc., using the money he saved from selling appliances. He later produced Emperador Brandy which would later be well-known here and abroad. 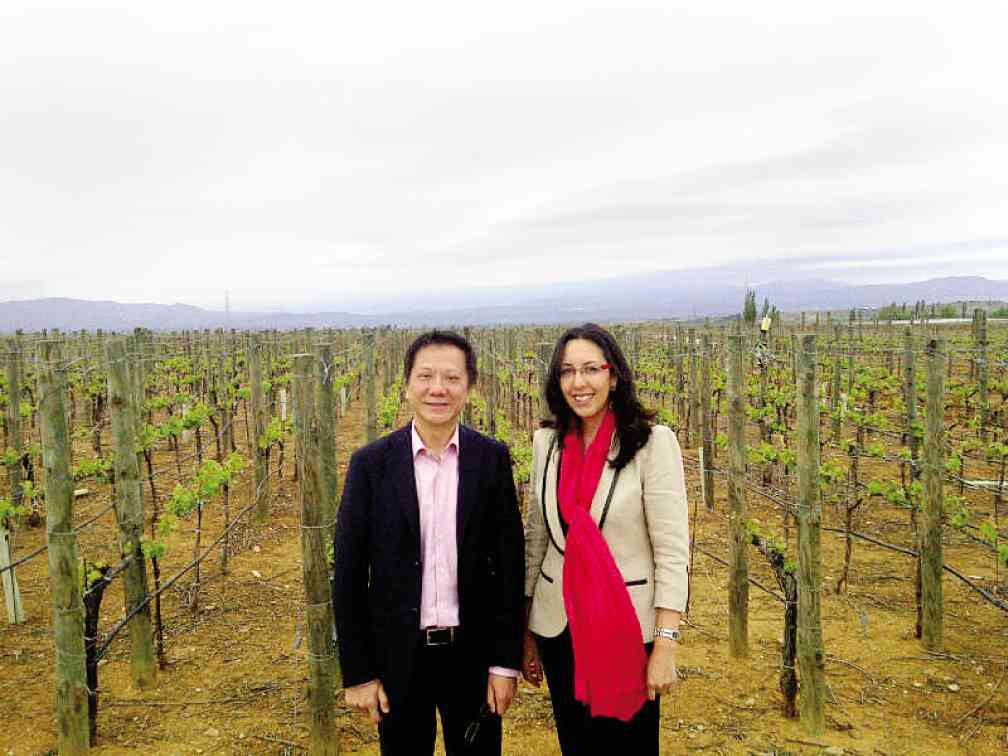 TYCOON Andrew Tan inspects the various grape varieties in the Finca Constancia vineyard in Toledo, Spain, with the estate’s chief winemaker, Beatriz Paniagua. With his Twin Lakes project in Tagaytay City, Tan is able to integrate two of his foremost passions: real estate and fine liquor.

He narrated how the company started working closely with the Philippine Economic Zone Authority (Peza) to bring investors and BPO firms to the country.

In 1997, during the Asian financial crisis, Megaworld had a difficult time leasing its office space because most companies were downsizing. However, a few foreign companies that wanted to set up IT businesses in the country inquired about possible tax incentives from the government, which would make locating here more feasible.

Peza director general [Lilia] de Lima, who Tan approached to explore the concept of a Peza-accredited IT park, sent a Peza team together with Megaworld executives to Bangalore, India, to study how it was successfully exporting its services to the world. Upon its return to the country, the Peza team began to draft the rules and regulations that would make the IT park a reality here.

This paved the way for the establishment in 1999 of Eastwood City, the country’s first Peza-accedited IT park.

From a few thousand employees since the start of the BPO industry in the country, the total workforce has grown to one million  after 14 years. Over 110,000 of the total BPO employees are now based in Megaworld’s various townships.

“We spot the opportunity and capitalize on it on a big, big way,” Tan said. When there was a need for more BPO buildings, “we orchestrated an office-building spree for BPOs including call centers.”

The success of Eastwood City as a township and cyberpark made Megaworld replicate the concept to its 10 other townships not only in Metro Manila but in Iloilo, Cebu and Davao as well.

Since its existence, Megaworld has completed over 320 residential, office, mall and hotel buildings and it is now working on 185 more.

Tan believes that tourism is the next best thing for the country. Through the Alliance Global Group that he chairs, he diversified into the tourism industry. He developed Newport City—the first of his integrated tourism projects—that is home to Resorts World Manila, a tourism hub right across Naia Terminal 3.

Tan was conferred the Order of Sikatuna, rank of Datu—the  highest award given to an individual by the Philippine government. 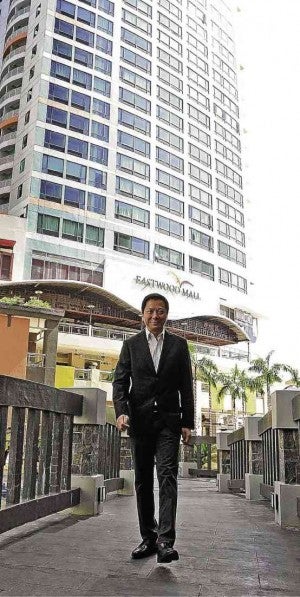 During the second annual Philippine Property Awards held at the Fairmont and Raffles Makati, Tan was chosen by the editors of Ensign Media’s Property Report magazine the Philippines’ Real Estate Personality of the Year. He was cited for leading one of the country’s biggest real estate conglomerates.

In December 2011, his alma mater UE conferred on him an honorary doctorate degree, its eighth recipient. Tan was recognized for his achievements in business and social responsibility. Another honorary doctorate degree was conferred on him in December last year by the Angeles University Foundation, citing him for being a visionary businessman, his efforts toward nation-building and his philanthropic projects.

The Asian Institute of Management launched in February 2012 the AIM-Andrew L. Tan Center for Tourism which Tan hopes will make a positive impact not just to the national economy but to individual Filipino families as well.

The Eastwood Mall was named Shopping Center of the Year 2010 by the Philippine Retailers Association.

During the 2008 Asean Business Award in Bangkok, Alliance Global Group Inc. was given the No. 1 Most Admired Asean Enterprise Award.

Despite the awards that recognize his outstanding feats and the achievements of the companies he leads, Tan is aware that success can only be sustained if one acknowledges the role of the surrounding communities in that success.

He shares his blessings with the less-fortunate members of society through the Megaworld Foundation that has granted over 3,000 scholarships worth P121.66 million from 2007-2012 alone. His other philanthropic acts are donating to social service programs as well as undertaking feeding projects, environmental campaigns and medical missions.

This property industry pioneer is not only receptive to innovations but also shows concern for their customers to whom he attributes the company’s success. “We remain on the lookout for new ways to give our customers more value for their money,” Tan stressed.