TAGUM CITY, Davao del Norte, Philippines – A P700-million waste-to-energy facility, which would produce up to two megawatts of power a day, will rise here in 2015.

On Monday, holding firm Metro Pacific Investment Corp. signed a memorandum of agreement with city officials, led by Mayor Allan Rellon, for the construction of the facility.

The energy-to-waste facility would utilize up to 80 tons of wastes for conversion to bio-fuel, according to MPIC president Jose Ma. Lim.

The bio-fuel that would come out of the process could then be used to fire up diesel-fed generators to produce two megawatts of power each day, he said. 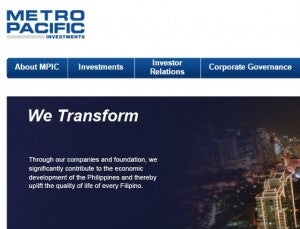 Rellon said the MPIC would be working with technology-provider Global Green International Energy Philippines (GGIEP) led by chief executive officer Alan Matthews for the construction of the facility.

“We have high expectations for the project. MPIC would put all its resources to make this a successful venture,” Lim said during his meeting with Rellon and other officials.

The facility will rise on a two-hectare land in Barangay San Agustin here and will use a technology called pyrolysis. The technology breaks down organic materials using high temperature to produce bio-fuel.

Elias Ragos, chief of the city environment and natural resources office (CENRO), said based on the briefer, the facility could generate 10,000 gallons of bio-diesel fuel from processed wastes such as plastic bags. The bio-fuel will then be used to produce up to two megawatts of power, which could be helpful for Tagum’s additional electricity needs, Ragos said.

According to Ragos, the project is viable here as residents throw at least 110 tons of various kinds of wastes per day, including residual wastes.

“They saw the city’s potential. Tagum is producing various wastes daily and our controlled dump site is very accessible, and they saw our systems, our bureaucracy is in place so we are excited … We’re open to this kind of development,” Rellon later told reporters.

Lim said the project would address waste management problems and power shortages besetting emerging urban centers like Tagum. He said that with the Tagum facility, the company would create a successful template, which could be replicated in other parts of the country.

“This is good as it allows wastes to be kept local. We make an economic return by cleaning up the environment,” Lim said.