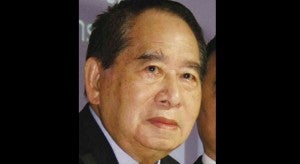 What’s the best gift for someone who’s got it all? Nothing else but a UAAP men’s basketball championship title that ended a 60-year drought, timely delivered right on the 90th birthday of SM group founder “Tatang” Henry Sy Jr. on Wednesday.

“This was something I didn’t want to tell you because I don’t want to unnecessarily stress you,” SM Prime Holdings president Hans Sy told the Bulldogs after National University defeated the FEU Tamaraws. “Today is my father’s birthday. You won it for him, so thank you,” he said.

Hans—who chairs the NU board of trustees and has been the Bulldogs’ biggest supporter especially this season—was of course euphoric to see his boys claim a sweet victory on Wednesday. Soon after the UAAP game, he had to rush to SM Megamall’s Fashion Hall for the “VIP’ soft opening of Swedish retailer H&M’s flagship store in the Philippines. He was sporting a shirt that proudly declared NU as “champion” of 2014 UAAP men’s basketball as he joined sisters Betty and Tessie (Sy-Coson) for the H&M event. (Earlier in the day, Betty said there was a simple lunch at the office held in honor of their dad on his 90th birthday).

“The good thing about the win is that everybody did not even rate NU. None of the players went into the (season’s) Mythical Five. That means the players worked as a team; (there’s) no (single) superstar,” Hans told Biz Buzz. His son Chico (aka Hans Sy Jr., VP for engineering at SM Prime), who was likewise at the UAAP game, added: “For once, NU felt like a school. Talagang napuno ng NU,” (It was really filled by NU students),” Chico said. He noted that Smart Araneta Coliseum posted a record audience, topping the 25,000 mark during the recent do-or-die game.

“I can’t describe it (his feeling after the UAAP victory). I’m extremely happy. I’m happy for the school, for the students and for the players and the community,” Hans said, describing his state after the UAAP games. His sister Tessie, chair of BDO Unibank, said his brother was “intoxicated” by the Bulldogs’ victory.

For all the euphoria, however, Hans said any big celebration would have to wait until after the ongoing exam period in NU. This is good because it gives NU time to prepare.

Will the Bulldogs get rewarded for this sweet victory? Hans said this was still being discussed. The only request of the winning team so far, he said, was that there be “no call time” in the coming week. Call time for the Bulldogs is 8 a.m. every day, with routine practices in the morning and the afternoon.

“The credit for NU’s victory goes to the team and Coach Eric Altamirano,” he said.–Doris C. Dumlao

Fresh from his World Bank stint, former National Treasurer Roberto Tan is expected to assume his old post while current Bureau of the Treasury (BTr) head Rosalia de Leon will be sent to New York to take over Tan’s position.

“We haven’t finalized the movements yet, but this would be a good opportunity for National Treasurer Lea de Leon to gain new perspective as the alternate director of the Philippines in the World Bank. Former Treasurer Bobby Tan, meantime, will come back,” Finance Secretary Cesar V. Purisima told reporters Thursday.

“Obviously we need [Tan’s] appointment, and the appointment has not been processed yet. But it’s just a question of paperwork,” the finance chief said. “Once I sign [Tan’s] nomination to the President, the President will have to sign and approve it, so I think it’s more administrative.”

According to Purisima, “there are no issues” if ever Tan comes back to head the BTr.

Tan serves as the representative of the Philippines sharing a seat in the multilateral lender’s board with eight Latin American countries.–Ben O. de Vera.

A soon-to-be-launched book on stock investing in the Philippines is making its sales pitch with a prominent quote from Manuel Pangilinan, who chairs the country’s biggest telecommunications firm, PLDT, and the Metro Pacific group.

The book—“Your Best Guide to Stock Investing” by Celso Vivas of the Shareholders’ Association of the Philippines—quotes MVP as saying that “a well-informed and actively engaged shareholder base is a key contributor to ensuring that companies conduct their business with competence, integrity and transparency.”

(The book will be available in National Bookstore starting Nov. 15.)

In any case, one of MVP’s people who help the group stay in touch with stakeholders is lawyer and former Palace press secretary Michael “Mike” Toledo.

As the spokesman of the MVP group of companies, Toledo runs a group that is in charge of communicating the strategic direction of the various firms in the group to the public at large.

Toledo was recently elected to the prestigious UP Law Alumni Foundation along with several other “stars” like Filipino-American businesswoman Loida Nicolas-Lewis. The group also includes legal luminaries like former Defense Secretary Avelino “Nonong” Cruz (who is its current president) and former Ombudsman Simeon Marcelo.

Toledo, whose “day job” is running the media affairs unit of Philex Mining Corp.—a very challenging job nowadays because of a political environment that is adverse to mining—was also appointed co-chair of business reform laws and chair of public affairs of the Philippine Bar Association.

Clearly, the man has a lot on his plate… enough to keep him occupied.–Daxim L. Lucas

E-mail us at [email protected] Get business alerts and a preview of Biz Buzz the evening before it comes out. Text ON INQ BUSINESS to 4467 (P2.50/alert).