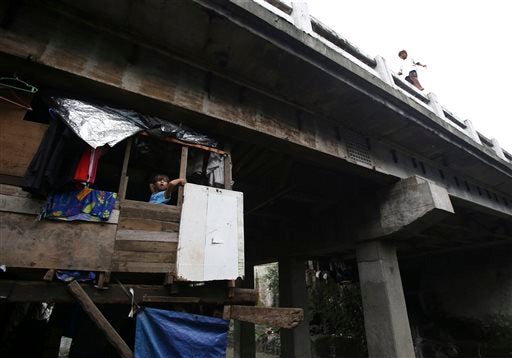 A Filipino boy stands inside their makeshift house under a bridge in suburban Quezon city, north of Manila, Philippines on Oct. 8, 2014. The gap between rich and poor Filipinos remains wide even as wealth inequality in the country has been rapidly declining in recent years, according Credit Suisse Group. AP PHOTO/AARON FAVILA

MANILA, Philippines–The gap between rich and poor Filipinos remains wide even as wealth inequality in the country has been rapidly declining in recent years, according Credit Suisse Group.

The National Economic and Development Authority (Neda) appeared to echo this sentiment when it claimed Wednesday that the robust economic growth was starting to trickle down to more and more Filipinos who were being served better in the areas of education and health care mainly through subsidies.

According to the research arm of global financial services giant Credit Suisse Group, there remains “very high inequality” in terms of wealth distribution among Filipinos.

The Philippines, Credit Suisse found out, has very high inequality, as the share of the 10-percent richest Filipinos was over 70 percent of the country’s wealth. In the year 2000, the top 10-percent of rich Filipinos held 79 percent of the country’s wealth. Their share fell to 69.2 percent in 2007, but again climbed to 76 percent this year, Credit Suisse data showed.

Apart from the Philippines, other countries where inequality in wealth distribution remained high were the developed economies of Hong Kong, Switzerland and the United States, as well as the emerging markets of Argentina, Brazil, Egypt, India, Indonesia, Malaysia, Peru, Russia, South Africa, Thailand and Turkey, Credit Suisse Research Institute said in its “Global Wealth Report 2014” published this month.

The country also belongs to the so-called “frontier wealth” level, where the average wealth per adult is between $5,000 and $25,000. Other emerging economies such as Brazil, China, Egypt, Indonesia, Turkey and Russia exhibit frontier wealth, Credit Suisse said.

The report said the “net worth per adult has reached a new all-time high of $56,000 worldwide.”

In the case of the Philippines, data from the Credit Suisse Global Wealth Databook 2014 showed that the average wealth per Filipino adult has grown by over 200 percent between 2000 and 2014, based on current exchange rates.

It claimed that, alongside the increase in wealth among Filipinos came a smaller gap between the rich and the poor.

Inequality fell rapidly “in Poland and Saudi Arabia over the period 2000-2014, and a significant reduction was experienced in eight other countries, again widely spread across regions and stage of development. They include Malaysia, New Zealand, the Philippines and Singapore in Asia-Pacific; France in Europe; and Canada, Colombia and Mexico in the Americas,” the report showed.

Also, Socioeconomic Planning Secretary and Neda director general Arsenio M. Balisacan said that success “in reducing inequality and poverty in the Philippines and other East Asian countries hinges on providing the poor and the vulnerable with equal access to economic opportunities and basic services” such as health and education.

The Philippines has made a deliberate effort to increase “spending for health and education, including the conditional cash transfer program. Our current fiscal space, which is a direct result of our institutional reforms, has allowed us to channel resources into human capital and support social protection programs,” Balisacan said in a message to a World Bank panel that discussed “Shared Prosperity, Inequality, and Poverty in East Asia and Pacific” last Oct. 10 in Washington, DC.