MANILA, Philippines—The Department of Budget and Management (DBM) on Wednesday said it has released P2.32 billion to support the livelihood of the beneficiaries of the government’s agrarian reform program.

According to DBM, bulk of the money or P2.31 billion would go to farmers. Rural women’s groups would be granted P4.3 million, while landowners would also secure P4.3 million. 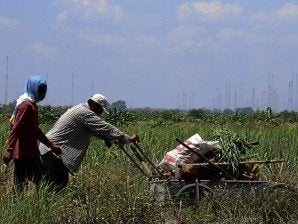 According to the DBM, the PBD aims to “support beneficiaries of the Comprehensive Agrarian Reform Program (CARP) in making their lands more productive, helping them create income-generating livelihood projects, and teaching them community governance.”

“Filipino farmers who have been granted land under the agrarian reform program will gain much from this fund release to DAR. Through PBD, the beneficiaries can make their farms more productive and bring their produce quickly to the market, among others,” said Budget Secretary Florencio “Butch” B. Abad.

“DAR’s continuing support to agrarian beneficiaries is an important part of the agency’s mandate to achieve agrarian reform. At the same time, we want to ensure that the government’s efforts to develop the rural areas will give our farmers a sustainable future,” Abad added.

To date, DAR has already distributed 6.9 million hectares of land to farmers, of which 751,514 hectares were given away during the Aquino administration, DBM said.

“Though the extension of CARP has already lapsed last June 30, 2014, DAR is still continuing its mandated task of distributing acquired lands covered by CARP as well as supporting the beneficiaries,” DBM claimed.

Abad: ‘Errata’ in 2015 budget only for ‘typographical errors’