Freezer invented by Filipinos for really cold beer arrives in US 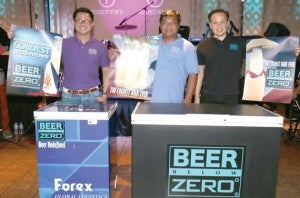 Beer Below Zero gets launched at Josephine’s Bistro in Cerritos, California. CONTRIBUTED PHOTO

LOS ANGELES – Beer drinkers love their beer ice cold. That’s usually 8 degrees Celsius if taken from a regular refrigerator. But what if they could drink beer at the perfect coldness – minus 8 degrees below zero?

The technology, known as Beer Below Zero, was launched in mainland United States on Friday, October 3, in a press conference held at Josephine’s Bistro in Cerritos, the first restaurant-bar in California to use the company’s patented cold case freezer.

BBZ International Inc., a 100-percent Filipino-owned company, is behind the revolutionary technology that enhances the taste of beer by serving it at what is deemed as the perfect temperature.

It invented the specialized freezer that cools beers just above the freezing point (-8 degrees Celsius) that is said to be the ideal state that enhances the crispiness of the beer’s taste.

Beer Below Zero, headed by its chairman and chief executive officer Luigi Nunez, is set to extend its products and services to the United States after successfully expanding to the Asia-Pacific market in 2010.

The exclusive distributor in the US is BBZ USA, headed by Jaime P. Carino Jr., who is also president and CEO of Forex Global. “We are excited to bring our one-hundred percent Filipino invention to the West. Our company wants nothing more than to establish the Philippines as the country that serves the coldest beers. Though we are committed to increasing our company’s global presence, we aim to maintain the brand’s identity as distinctly Filipino,” said Nuñez.

“The Philippines is known all around the world for many reasons—world-class beaches, exotic cuisine, friendly locals. One of the objectives of Beer Below Zero is to add to that list by making the Philippines the top source and destination for revolutionary refrigeration technology for extremely cold beers,” added Nuñez, who is helping to promote the product in the US.

“We are just as excited and proud to be Beer Below Zero’s partner in the United States. BBZ’s revolutionary technology is a source of pride for Filipinos all over the world. We are happy to be chosen to exclusively distribute the 100-percent Filipino-made product here in the United States,” Carino said.

Beer Below Zero was founded in May 2008 and has since created a demand for beer refrigeration technology. Aside from producing freezers for commercial establishments, the company has also produced small beer freezers for personal-use as well as a mobile application that records users’ daily beer consumption.

The freezers will also be available for rent for special events, Carino said. The freezers and technology are both patented in the Philippines, two patents for design and two for utility models.

Beer Below Zero currently has more than 800 outlets in the Philippines and over 200 in international markets, including Guam, Hawaii, Thailand, Singapore, Hong Kong, Vietnam and Chile.

Beer Below Zero was invented by Nunez and two beer-drinking friends. Nunez, who is part owner of Grilla Bar and Grill, would invite Jay-Jay Angala whenever his close friend was in town, together with another friend, Vincent Co-Say at Grilla.

They would always ask for beers served in the coldest possible state for their drinking sprees. The idea of mass producing the service of preparing beers in the coldest state possible eventually dawned on them, and after several backyard experiments and a couple of broken beer bottles, the three – with the help of refrigeration specialists and chemists – finally produced the technology of freezing any kind of beer just below its freezing point.

“To keep the beer ice cold, drinkers would usually pour the beer in a glass with ice. But as the ice, which is made from water, melts, the beer is diluted by water and loses its flavor. But taken from a Beer Below Zero freezer, part of the beer itself is frozen, thus retaining the flavor of the beer,” Nunez said.

The special BBZ freezer cools the beer to minus 8 up to minus 13 degrees Celsius depending on the prevailing temperature in the drinking place or on the kind of beer. Beer Below Zero freezers have increased tremendously the sale of beers in establishments that use them, Nunez said.

In Thailand, for example, bars and restaurants using our BBZ freezers have reported an average 80-percent increase in sales, and in Vietnam, more than 100 percent.

Read Next
Where can you get the best advice?
EDITORS' PICK
India records more than 4,000 daily COVID-19 deaths
Robredo eyes local post in 2022 polls, but ‘open to all possibilities’
POVA x Mobile Legends Bang Bang: A partnership that’s built to win
Must-know scams to avoid when buying cars
PH logs 5,790 new COVID-19 cases, 140 deaths — DOH
Tired of your Wi-Fi signal problems at home? Here’s a solution!
MOST READ
Woman believed to be dead wakes up minutes before her cremation
Hot, humid weather for PH on Monday — Pagasa
John Lloyd Cruz makes official showbiz comeback under Maja Salvador’s talent agency
Dave Bautista on his Filipino grandfather, living with regret and being around superheroes and zombies
Don't miss out on the latest news and information.