Investment pledges up 6.2% in 9 months 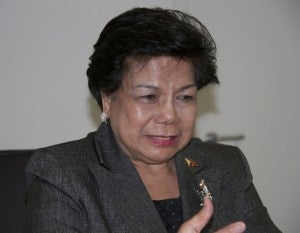 MANILA, Philippines–Investment pledges approved by the Philippine Economic Zone Authority (Peza) grew by 6.2 percent to P148 billion in the first nine months of 2014 from P139.6 billion a year ago, driven largely by the expansion activities of ecozone locators.

Most of the investments are supposed to fund projects engaged in manufacturing, Peza director general Lilia de Lima said on the sidelines of the International IT-BPM Summit yesterday.

The approved pledges from January to September, however, were only worth half of the agency’s target of P299 billion for the year—8 percent higher than the P276.13 billion worth of investments approved in 2013.

But according to De Lima, the agency is optimistic that it will be able to meet its target for 2014.

The projects to be approved in the last quarter, she said, are expected to boost the total investment commitments.

Peza’s 2014 target was based on the agency’s performance in the previous years. It also considered the global market situation and other factors, including movement of electronics products and devices in the world market, growth of the global automotive industry, the upgrade of electronic and electrical machinery, modernization of equipment, and the continuing upgrade of medical devices.

Data further showed that, as of end-August, exports from ecozones managed by Peza inched up by 3.8 percent to $29.03 billion, from the $27.96 billion posted a year ago.

Meanwhile, Peza continued to woo investors, including Japanese manufacturing companies and banking institutions, whose clients are already existing locators at the ecozones.

Elmer H. San Pascual, group manager of promotions and public relations group of Peza, said that De Lima would be meeting with the Japanese companies in November, and with Mizuho Bank in December.

“[De Lima] has commitments to go to Japan for two more visits. The one in November is being arranged by our commercial offices in Osaka and Tokyo. There are companies in certain prefectures in Japan that still have a lot of inquiries, and are not that familiar with the Philippines. On our part, we would want to attract those engaged in manufacturing or for export of IT-enabled services like business process outsourcing,” San Pascual explained.

In December, De Lima is expected to meet with officials of Mizuho Bank of Japan and some of the bank’s clients to address concerns and queries.

According to San Pascual, Mizuho, along with other foreign banking institutions, has been urging the government to open branches at the Peza-managed ecozones to cater to the requirements of locators.

“Banks are the first line of information for Japanese companies looking to put up operations overseas. Big Japanese companies are usually more comfortable if there are Japanese banks that could service them in the Philippines,” San Pascual said.

“We just opened our banking system so the Bangko Sentral ng Pilipinas can accredit more foreign banks, wanting to [put up offices] in the Philippines, like Korean banks who can cater to the Korean companies operating here,” he added.

Aside from Mizuho, Peza already met with officials of Bank of Tokyo-Mitsubishi UFJ, Ltd., the largest bank in Japan, and Sumitomo Mitsui Banking Corp. earlier this year. The banks’ clients currently have manufacturing facilities in the Philippines.

Peza and Japanese financial institutions have existing agreements that called for the sharing of information and the conduct of promotional activities.