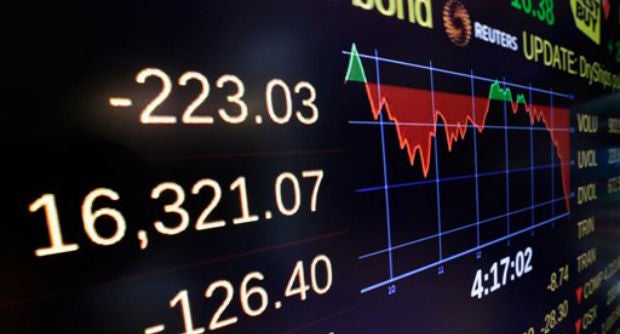 After choppy trade earlier, Wall Street stocks turned decisively negative in the last hour or so of the session.

“It’s a continuation of concerns about global growth.”

US stocks suffered a massive sell-off last week, with the S&P 500 shedding more than three percent on global growth fears and the Dow ending in negative territory for the year.

On Monday, the volatility index, often seen as a measure of anxiety in the market, finished at 24.64, the highest level since June 2012.

Third-quarter earnings season picks up considerably Tuesday with reports from Dow members JPMorgan Chase and Johnson & Johnson, as well as big banks Citigroup and Wells Fargo. Reports later in the week are due from Intel and Google.

Investors are watching for commentary from multinationals on whether they see weakening conditions overseas will hit fourth-quarter results, Hogan said.

Fiat Chrysler Automobiles fell in its first day of Wall Street trade. The newly merged Italian auto giant debuted on the New York Stock Exchange under the ticker symbol FCAU at $9.00 a share. Shares closed at $8.92, after hitting a peak of $9.55.

The US bond market was closed in observance of Columbus Day.