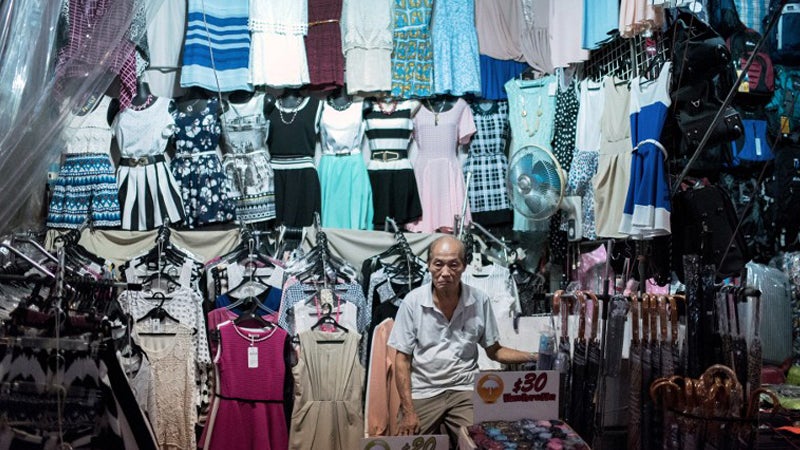 This photo taken on Oct. 4, 2014, shows a vendor sitting at a stall selling dresses, umbrellas and bags, near a pro-democracy protest site in the Mong Kok district of Hong Kong. From bargain fakes and cheap tech to high-end designer wear Hong Kong is a shopper’s paradise–but retailers have taken a huge hit from weeklong mass protests that have brought the city to a standstill. AFP PHOTO/ALEX OGLE

HONG KONG—From bargain fakes and cheap technology to high-end designer wear, Hong Kong is a shopper’s paradise—but retailers have taken a huge hit from weeklong mass protests that have brought the city to a standstill.

Major shopping areas have been barricaded off by protesters who have camped out for the last seven days to pressure Beijing to revoke its decision to limit who can stand in the city’s next leadership election—a move protesters have labeled a “fake democracy.”

Many of the stores overlooking the protest sites have closed, while others have remained open but largely empty.

“The retail sector is one of the four pillars of the Hong Kong economy,” said Francis Lun, a financial analyst—the others being finance, transport and shipping, and real estate.

“The government growth rate [for the year] is already low at 2 percent… so these major disruptions happening in Hong Kong are strongly felt,” Lun added.

Hong Kong’s economy has weakened as China’s economy has slowed and the mainland’s anticorruption drive has also dampened luxury spending.

Gross domestic product slowed to a mere 1.8 percent in the second quarter of this year, down from 2.6-percent growth in the previous three months.

A contraction in the third quarter would push the city’s economy into recession.

For the first eight months of this year, total retail sales decreased by 1.0 percent in value over the same period in 2013, official data show.

According to figures collected by the Hong Kong Retail Management Association, a trade group, if weak retail sales persist, it could lead to the industry’s first full-year contraction since 2003.

Finance Secretary John Tsang warned on Friday that the protests threatened to damage Hong Kong’s reputation as one of the world’s premier financial hubs.

“Particularly, our concern is about our reputational risk as well as the confidence in the market system in Hong Kong,” he said.

Shop workers told Agence France-Presse (AFP) of a major drop-off in business as both locals and tourists stay away.

“I’ve seen a 70-percent drop in profit every day this week,” said Chicken Chan, 30, manager of a dispensary in the commercial district of Mong Kok, one of the major protest sites which saw violent attacks by opposition groups on Friday.

“I feel a little conflicted because I support Occupy Central and the students but I’m losing money,” added Chan, whose shop sells Western medicine, dried seafood and milk powder. “Ninety-nine percent of our income is from mainland tourists.”

Hong Kong’s retail sector is heavily reliant on mainland Chinese visitors, who contributed about a third of the city’s retail sales in 2013, according to Credit Suisse.

The protests have coincided with the Golden Week national holiday that brings large numbers of mainland shoppers to the city, with October being the second-biggest retail period after December.

“It really affected business. There have only been two to three customers today,” said Merry Djong, who works at the Mong Kok branch of jewelry and accessories shop Folli Follie that looks over one of the protest sites.

Travel agents on the mainland are reported to have been barred from booking any more group tours to Hong Kong in the wake of the protests, leaving some shop owners angry with the demonstrators.

“It has been an 80-percent decrease [in business]. This (the protest) is a 100-percent illegal occupation,” said Jimmy Luk who owns a traditional medicine shop in Causeway Bay, one of the protest sites.

Carrie Chan, who works at Baleno clothing shop, reported a 50-percent decline in sales since the start of the protest.

“We never expected Occupy Central to last this long,” she told AFP.

Hong Kong shares have lost around 10 percent since a year high in early September, though they ended 0.64 percent higher on Friday.

Retails shares in particular have slid since demonstrators took over parts of the city.

But some analysts say that the initial market reaction to the protests may have been overblown.

“It is still a powerful financial center,” said Michael Kugelman, an Asia expert with the Woodrow Wilson International Center for Scholars.

Some businesses have seen protest-driven rises in sales of particular items.

Umbrellas have become a symbol of the protest movement after protesters used them to shield themselves from pepper spray fired by police.

Sports shop owner Salina Tsang also reported high sales of swimming goggles—also being used to shield protesters’ eyes from tear gas—again a drop in the ocean of a general downturn.

“Our customers are mainland tourists. There are barely any here,” she said.