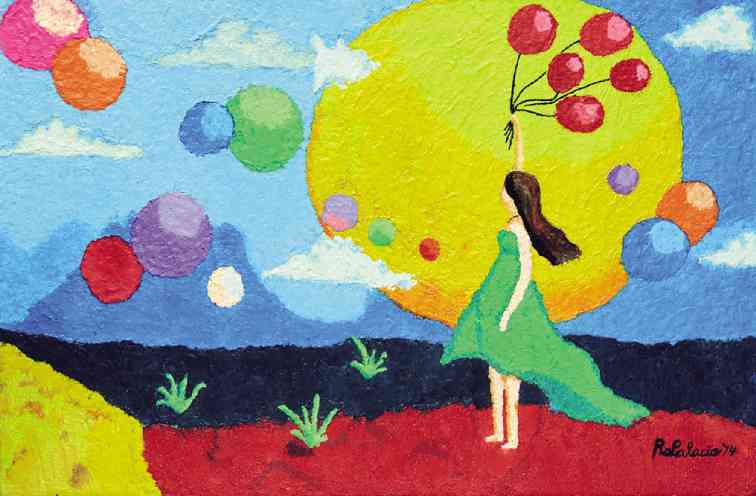 RAPHAELA Palacio and Billy Pomida are among the 14 artists from Tacloban artists who used paper clay as a new medium.

Girl Power at its finest.

Three women, brought together by a supertyphoon, joined hands to help others help themselves.

In 2005, Sue G. Morales discovered she can make art through paper clay. It was during a bonding activity with her daughter, Angela, when she got a handful of papers and mixed them with a processor to make colors come to life, she recalls.

That moment, she discovered a new art medium.

She called her startup company, JNBM Paperclay. JNBM stands for the initials of her husband, Jesus Nelson. The paper clay is a first in the Philippines so Sue had it patented. Nontoxic and proudly Pinoy, Sue expanded her business and opened over 13 branches across the country in a span of nine years.

But she wanted more out of it the experience than just growing the business.

“I wanted [paper clay] to be explored by artists and masters,” Sue says. She envisioned an exhibit that would feature paper clay as an avenue for art expression. She shared her idea with Ruth Ramirez during spa date.

Ruth, who hails from Tacloban and the wife of a pastor, is a survivor of supertyphoon “Yolanda” that ravaged Eastern Visayas last year and left a trail of torn structures and ruined lives.

Ruth got in touch with the Kasi-kasi Art Association, an artists’ group based in Tacloban. Not one of them had been left unscarred by Yolanda’s wrath. Some of them lost everything including loved ones, homes, and artworks.

“Most of them rely only on painting as their source of income,” Ruth says.

Ruth asked Sue if she could send some of her paper clay to Tacloban so that the artists could make use of it to create art and support themselves. Sue, who volunteered in Oplan Salubong at Villamor Airbase, gamely sent kilos and kilos of paper clay to the artists.

Ybanez said it took him two weeks to adjust to working with paper clay. This medium does not require the conventional paintbrush, rather, barbecue sticks are used to apply paper clay. But the artists also experimented with bamboo sticks, chopsticks and palette knife in creating.

In a month’s time, they painted 25 pieces of art using paper clay on canvas.

Asked about his inspiration for the artwork, Ybanez said: “Yolanda is not the inspiration … It is about hope and getting back on your feet.” 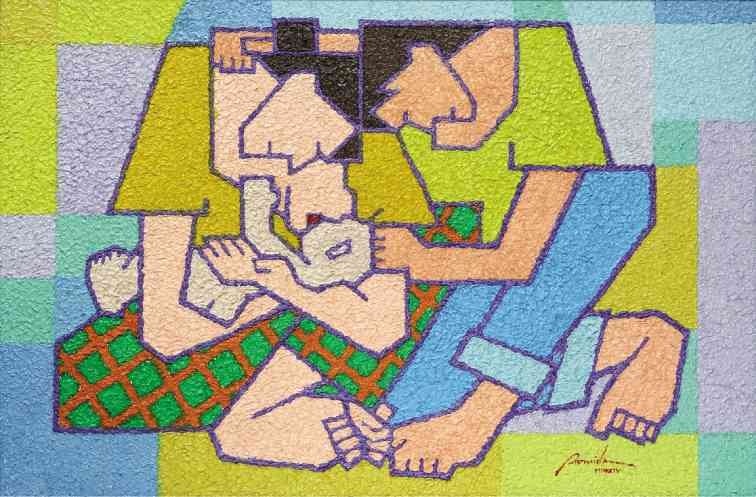 RAPHAELA Palacio and Billy Pomida are among the 14 artists from Tacloban artists who used paper clay as a new medium.

Drawing from the artists’ sentiment of moving forward with their lives, Sue and Ruth mounted an exhibit that showcased “the creativity, imagination and hope to birth the beautiful out of tragedy.”

They aptly called the exhibit “Paglaum,” which translates to hope.

Archie Zabala lost 11 members of his family to the supertyphoon. Their ancestral home was located near a river and, when the storm struck, floodwater from the overflowing river rose faster than expected, he says. It swept their ancestral home and laid waste to life and property. Archie survived because, when the storm hit, he was in another part of town, accompanying his pregnant wife for a checkup.

Cristoph Raphael, Archie’s son, was born days after the supertyphoon hit Tacloban. With the birth of his son, Archie is convinced of God’s will, that the world must carry on despite all that has happened.

“Our ancestral home will be transformed into a playground. So that the gaping hole left will be replaced by children’s laughter instead,” Archie says.

To further their cause, Ruth and Sue got in touch with Jhoey Fernandez, founder and executive director of #TindogTacloban.

According to Jhoey, the TindogTacloban movement aims to eradicate systematic poverty in Tacloban through transformational programs and projects, with special focus on education, social entrepreneurship and innovation.

Jhoey explains that the relief phase in Tacloban is over. Now, the focus is on rehabilitation and the rebuilding of lives affected by the supertyphoon.

“The exhibit is a creative debriefing for the artists involved,” she says.

For her, Tacloban has brought out the best of the Filipino spirit.

“Haiyan taught us two things: Resilience and innovation,” she says. The movement that started as a community group on facebook now channels more effort to raise funds to help Tacloban get back on its feet.

“We want to erase the culture of mendicancy, so we avoid dole-outs. We want something transformational. Poverty does not only mean you’re penniless, it also means hopelessness. [The exhibit aims] to uplift the artist and tell him or her that yes, life goes on. And yes, you can do it,” she explains.

The proceeds from the sale of the artworks will be split among the artists, TindogTacloban and for the maintenance of the art caravan. Sue and Ruth kick-started the exhibit at Resorts World last Oct. 1, which lasted until today. Sue says that in November the exhibit will move to Ayala Malls. Manila FAME and Manila Art will include the artworks in their exhibits at SMEX and SM Aura.

When the exhibit ends, the artists will return to Tacloban and there, they will teach art to children living in temporary shelters.

“This way, the recipients [artists] will not only be changed, but also transformed,” Jhoey says.