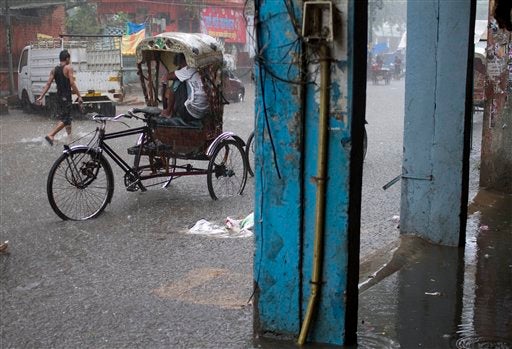 In this Sept. 29, 201,3 file photo, an Indian rickshaw puller sits atop the passenger seat to protect himself during heavy downpour in Allahabad, India. Scientists looking at 16 cases of wild weather around the world last year see the fingerprints of man-made global warming on more than half of them. Researchers found that climate change increased the odds of nine extremes: heat waves in Australia, Europe, China, Japan and Korea, intense rain in parts of the United States and India, and severe droughts in California and New Zealand. AP PHOTO/ RAJESH KUMAR SINGH

WASHINGTON–Heat waves last year in Asia, Europe and Australia were influenced by human-caused climate change, but not all extreme weather events could be linked to global warming, scientists said Monday.

A total of 16 extreme events–including rain, flood, droughts and storms–were analyzed in an annual report titled “Explaining Extreme Events of 2013 from a Climate Perspective,” published by the Bulletin of the American Meteorological Society.

The events chosen for study do not represent the year as a whole, but rather those that had big impacts and were of scientific interest, said the peer-reviewed report, compiled by 92 scientists from around the globe.

The most certain link between extreme weather and the burning of fossil fuels–which spew carbon dioxide and contribute to mounting levels of greenhouse gases–was seen in Australia.

Five independent studies all found that human influence had substantially increased both the likelihood and severity of heat waves in that country.

“The results of the Australia study are rather striking,” said Peter Stott, a co-editor of the report from the UK’s Met Office Hadley Center.

“They have actually shown that the chances of observing such extreme Australian temperatures in a world without anthropogenic climate change is almost impossible,” he said.

In New Zealand, global warming “caused meteorological conditions that were more favorable for drought in 2013,” it added.

Both natural climate variability and human-driven warming were found to be factors in Western Europe’s hot and dry summer.

There was also evidence that human-caused climate change contributed to heavy, once-in-100-year rains in India in June 2013, the report said.

However, not every extreme weather event was found to be influenced by climate change. In some cases, natural variability in climate was deemed the leading factor.

Scientists were unable to find any human influence on some storms, including the 2013 South Dakota blizzard, cyclone Christian in northwestern Europe, and an extreme snowfall in the Pyrenees.

“Given what we know today, it is a lot easier for us to associate heat extremes with human influence than it is with some of the other extremes,” said Thomas Karl, head of climatic data at the National Oceanic and Atmospheric Administration.

The science of studying the links between climate change and extreme weather is continuing to advance, and more refined measurements are hoped for in the future, said Marty Hoerling, a co-editor of the report.

He said a broad range of weather patterns were affected by climate change, not merely heat waves.

“It is almost (taken) for granted that climate change is influencing all manners of weather events,” Hoerling told reporters.

But two other research groups said the influence on the California drought remained uncertain.

“A clear picture of how exactly long-term climate change impacted the California drought has yet to emerge from the papers that are in this particular report,” said editor Stephanie Herring of NOAA’s National Climatic Data Center.