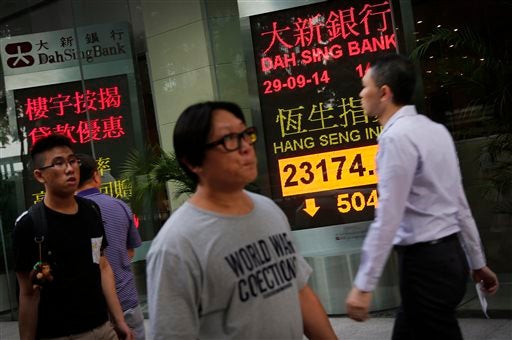 HONG KONG — Hong Kong’s shares tumbled Monday and the local dollar hit a six-month low against the greenback as pro-democracy protests brought parts of the city to a standstill, with many schools, businesses and banks shut.

As demonstrators refused to back down on their demands for China to grant the city universal suffrage, fears of a long stand-off saw investors sell major banks including HSBC and Standard Chartered.

In response, the stock exchange said trading would continue as normal while the de facto central bank sought to reassure investors by making liquidity available to support the banking system.

The city’s financial chief also said the government was tracking events on markets.

However, the Hang Seng Index sank 2.20 percent at one point before paring some of the losses to end 1.90 percent lower.

“We are likely to see (a) major sell-off and volatility for days to come” in the Hong Kong stock market, said a report by New York-based advisory firm JL Warren Capital.

It said those likely to be hurt most would be Hong Kong-listed retailers such as luxury businesses selling products purchased by mainland tourists, and local and Macau tourism businesses.

The protest will be felt especially in the retail sector as the Chinese Golden Week holiday begins on Wednesday — usually a time when big-spending mainlanders visit Hong Kong’s numerous shopping outlets.

ANZ senior economist Raymond Yeung said the protests will “add salt to the wound” of the retail industry, already reeling from a slowdown in the China economy.

Sunday’s unrest was the worst since the handover in 1997 and saw police fire volleys of teargas into crowds of thousands.

While the trouble subsided by Monday morning, crowds of defiant demonstrators still controlled a number of major thoroughfares and intersections in the congested city.

An AFP reporter in Mongkok — one of the most densely populated districts and the site of a second protest across the harbor in Kowloon — saw angry confrontations between protesters and members of the public frustrated at the disruption.

The Transport Department said more than 200 bus routes were suspended or diverted while central sections of the tram network were also down.

The underground rail service was largely unaffected but multiple station exits in the busy districts of Causeway Bay and in Admiralty — where many international businesses are located — were barricaded by protesters. Some exits at Mongkok were also blocked.

The stock exchange insisted it would continue to operate as normal but the Hong Kong Monetary Authority (HKMA) said 17 banks were forced to close 29 branches across the city.

Standard Chartered, HSBC Holdings, Bank of East Asia, the Bank of China and CITIC were among those who said their operations were affected.

“The HKMA will also inject liquidity into the banking system as and when necessary under the established mechanism.”

Later it announced there was still ample cash in the banking system. It also said the exchange rate remained generally steady despite the Hong Kong dollar slipping to 7.7623 against the greenback — its lowest since March.

The Education Bureau said schools in the areas where protesters had gathered would remain closed.

The government also announced all committee meetings at the city’s legislative building, which has become a major gathering point for protesters, would be cancelled.