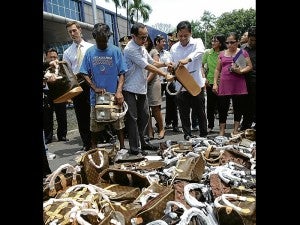 PHILIPPINE authorities slash and tear bogus products to mark World Anti-Counterfeit Day. According to global luxury brand Louis Vuitton, the price of imitation goods sold on the market may be low, but it exacts a higher cost on the children who help produce these illegal products. FILE PHOTO

The total value of counterfeit and pirated products seized by the National Committee on Intellectual Property Rights (NCIPR) has reached P8 billion in the first eight months of the year, due largely to the government’s aggressive efforts to enforce intellectual property rights in the country.

Ricardo R. Blancaflor, director general of the NCIPR member-agency Intellectual Property Office of the Philippines (IPOPHL) said in an interview that this was roughly P300 million away from the record high posted by the agency in 2011, when the value of seizures reached P8.38 billion.

But the value of the goods seized from January to August this year had already exceeded the P7-billion target set by the IPOPHL for 2014.

These seizures included the haul of by     the National Bureau of Investigation (NBI), the Bureau of Customs (BOC), the Optical Media Board (OMB) and the Philippine National Police (PNP).

To boost intellectual property rights enforcement in the country, the IPOPHL on Thursday inked a memorandum of understanding with the Korea Copyright Commission (KCC) to further explore more avenues where the copyright systems in both the Philippines and Korea can be further improved through the exchange of best practices.

This partnership was also expected to contribute to cultural development.

“There will be a lot of information exchange among the two countries. This way, the copyright based industries like film, music, books, etc. in the Philippines can learn from Korea,” Blancaflor explained.

“There will also be cooperation among law enforcement agencies involved in anti-counterfeit and antipiracy efforts,” he added.

A forum was also jointly held by the IPOPHL and KCC on Thursday in a bid to help educate the participants on the latest issues and trends on copyright in the Philippines and in Korea.