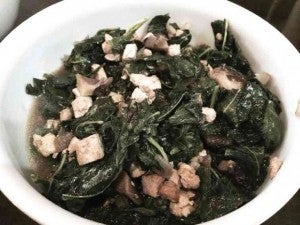 SPINACH and mushroom are among the top sources of potassium. Photo by Tessa R. Salazar

Data released by the Department of Health in 2013 cited that 25 percent of Filipino adults, or about 14 million, suffer from hypertension (high blood pressure), a major risk factor for heart disease and stroke.

Heart disease and stroke remain two of the top killers of Filipinos and comprise 35 percent of total deaths.

Philippine Health Statistics data show that in 2009 about 167,000 Filipinos died from heart disease and stroke. Half of these deaths were likely related to high blood pressure. An analysis done by the Philippine Institute for Development Studies (PIDS) further reveals that 34 percent of all cardiovascular deaths are happening prematurely or at ages below 60.

Though the statistical realities of hypertension, stroke and heart disease have been divulged at length, little has been actually discussed on diet as a means of prevention, much less the potentials of a mineral such as potassium in significantly reducing the risk of stroke.

A recent Physicians Committee for Responsible Medicine’s Sept. 5 Breaking Medical News noted that a diet rich in potassium reduces the risk of stroke for postmenopausal women. It shared a study published online in the American Heart Association journal Stroke.

PCRM noted that researchers analyzed the potassium intake of 90,137 postmenopausal women as part of the Women’s Health Initiative Observational Study. Women who consumed the most potassium reduced their risk of all stroke types by 12 percent and lowered their risk of ischemic stroke (stroke due to clot formation) by 16 percent, compared with those who consumed the least amount. 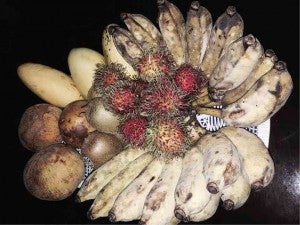 FRUITS are also good sources of calcium, among other nutrients. Photo by Tessa R. Salazar

“This study suggests that all women should consume more potassium from foods like sweet potatoes, bananas and white beans to meet or exceed daily recommendations,” it said.

Nedley said: “There are many foods that can be freely eaten without concern about their sodium content,” he said in his book “Proof Positive,” where he cited food groups low in sodium such as fresh fruits, grains and cereals, unsalted nuts, vegetables and shredded wheat.

“Fruits provide a double benefit in that they are also high in potassium, which tends to reduce blood pressure even further. This is partially why a natural diet high in fruits, vegetables and grains is the answer to the blood pressure problem,” Nedley said, adding that, however, “any food that is low in sodium can be made high by shaking the salt dispenser over it.”

A common breakfast food, oatmeal, has been found to reduce blood pressure. In one study, 850 people were categorized for the amount of oatmeal they consumed. One bowl per day consumers had lower blood pressure and lower cholesterol.

Nedley suggested the following for people who would want to manage their blood pressure:

• Eat plenty of fruits, vegetables, grains and unsalted nuts in moderation, and other low-sodium foods.

• Eliminate coffee, cola drinks and alcohol from the diet.

• Give the salt shaker a rest.

• Bring your weight down to the recommended level for your height and build.

• Adopt an aerobic exercise routine, such as brisk walking.

• Learn to cope with stress.