PARIS—President Benigno Aquino III has declared 2015 as a “banner year” for the Philippines owing to its economic “turnaround” and in time for the Southeast Asian regional integration. 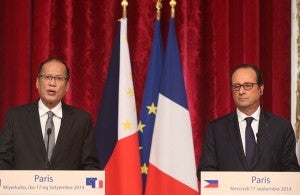 “Given the unprecedented confidence enjoyed by our country, we expect 2015 to be a banner year,” he said in a speech at the French Institute of International Relations Thursday night (12:30 a.m. Friday) in Manila)

“After all, the factors that can allow us to build on our momentum are in place,” he added, citing the so-called “demographic sweet spot” that the country is expected to hit next year with a big proportion of the population entering working age.

“We have been investing in our greatest resource—our people, resulting in an expanding, productive labor force now even more prepared to seize all the opportunities. We have a strategic location, and vast potential to be a crucial hub of trade, investments, and services.”

The President said the Philippines’ “economic turnaround” was “especially significant” with the formal integration of the Association of Southeast Asian Nations into “economic community” next year.

Aquino said the integration would also open doors of opportunity to France and the rest of Europe.

“This is a milestone in the evolution of Asean as we pursue the common prosperity of our peoples and foster the peace and stability fundamental to continued development,” he said.

“This is a timely development. Given the recovery of markets in the Western Hemisphere, increased cooperation can only redound to a healthier global economy, and the promise of further growth and development for all.”