DOTC to put off MRT 3 fare hike for now 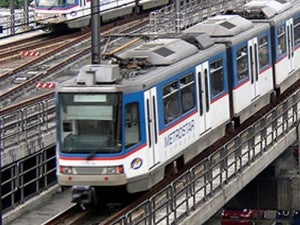 MANILA, Philippines—The Department of Transportation and Communications (DOTC) has decided to put off a fare increase for the busy Metro Rail Transit Line 3 possibly until 2015, determining that services will have to improve first, a government official said on Thursday.

But Transportation Undersecretary Jose Perpetuo Lotilla said that the agency would push through with its plan to increase the rate of Light Rail Transit Line 1. The DOTC committed to the LRT 1 rate hike when the rail line extension project was awarded to a consortium of Metro Pacific Investments Corp. and Ayala Corp.

The fare hike for all three elevated railways—MRT 3, LRT 1 and LRT 2—had been approved since 2011, but officials said it was difficult to implement it, partly because of strong public opposition to the move.

The government wants to hike the rates, which have not been increased in over a decade, to reduce billions of pesos in subsidies to operate the money-losing rail lines.

“I think we can only increase the MRT 3 [fare] once services have improved,” Lotilla told reporters on Thursday. “I think we will be making improvements starting next year. So it should be [possible] to increase [the rate] next year.”

MRT 3 commuters have been suffering from hourlong queues, packed cars and frequent breakdowns. Those instances, the government said, are related to congestion as MRT 3 handles over half a million people a day—way over its design capacity to only serve 350,000 people daily.

DOTC had planned to hike rates in August last year but later decided against it.

Rates would rise by an average of P5 for an “average trip,” the DOTC said. referring to its “11+P1” formula. This means that a commuter must pay a boarding charge of P11, plus P1 for every kilometer traveled.

Another public consultation was held in December last year, but no date for the increase has been set.

“The government has a commitment to increase the fares before we take over, or the effect would be the government would have to compensate the concessionaire [for the difference],” said Ferdinand Incacy, Metro Pacific vice president for business development.

Light Rail Manila is expected to assume operations of LRT 1 a year after it signs the concession agreements.

The elevated rail lines remain one of the most inexpensive means of transportation around Metro Manila. The MRT 3, for example, charges a maximum amount of P15 for an end-to-end trip on Edsa against, about P40 charged by a public bus plying the same route.