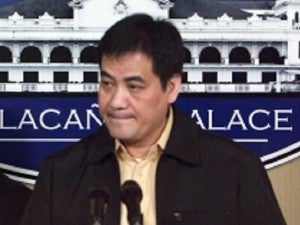 MANILA, Philippines — Malacañang has assured lawmakers that Energy Secretary Carlos Jericho Petilla would not keep them in the dark on the details of the special powers requested by President Benigno Aquino III.

“The President is just asking for emergency powers; the details will be filled up by Secretary Petilla. That will have to be discussed by the Department of Energy with both the House and the Senate,” said presidential spokesperson Edwin Lacierda in a briefing

Lacierda clarified that the President sought authority from Congress to invoke Section 71 of Epira (Electric Power Industrial Reform Act) in case of a power shortage between March and May 2015. “That’s why the President has informed the public ahead of time. We’re asking for authority from both Houses,” said Lacierda.

Lacierda has admitted that the government is wary of repeating the mistakes of the past specifically, the “take or pay” provisions in the slew of independent power producers (IPP) contracts that were signed during the Ramos administration to solve the power crisis in the 1990s. “Yes, that is a concern. That is why we want to make sure we only pay for what we actually use,” said Lacierda.

Lacierda said that Malacañang would also advocate for energy conservation measures especially with the onset of the “El Nino” weather phenomenon later this year and the power shortage in 2015.