SMC still keen on taking to the skies | Inquirer Business

SMC still keen on taking to the skies 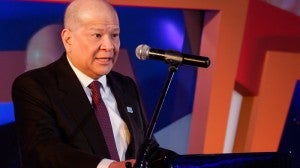 MANILA, Philippines–After only two years, conglomerate San Miguel Corp. (SMC) exited the airline business with the sale of its stake in flag carrier Philippine Airlines Monday, but its ambitions to again take to the skies does not end there, its top executive said.

Speaking up for the first time since SMC sealed the deal to sell back its 49 percent share to the group of taipan Lucio Tan, San Miguel president Ramon S. Ang said that, with the right opportunity, the conglomerate would re-enter the airlines business.

In SMC’s case, the right opportunity means a global operation like a United States or a Japan-based carrier, which Ang said would provide much greater scale, and consequently, earnings.

Apart from airlines, the company is keen on investing in oil and energy deals abroad, Ang said.

Still, he noted, a major airline deal may be far-fetched for now, given that his targets likely “won’t sell.”

But he said this is a goal he would pursue either in his personal capacity or through San Miguel.

“American airlines … earn billions and billions of dollars because their capacity and demand are balanced,” Ang told reporters late Monday. “If you can become one of the big players, it’s like printing money.”

Ang, meanwhile, admitted that San Miguel understood the challenges facing Philippine Airlines when they entered the business in 2012, namely, falling market share due to stiff competition from budget airlines and volatile fuel prices.

But Ang, who is credited with engineering San Miguel’s aggressive diversification into power and infrastructure, said airlines were like any other business the conglomerate had managed.

“At the end of the day, it’s the discipline, the balance sheet and cash flow,” said Ang, who believes that SMC will be leaving Philippine Airlines in a much better position now than when it first entered.

“We turned it around completely. We made sure [that] the right aircraft [would fly] to the right destinations,” said Ang.

He cited the company’s “one brand strategy” for the airline and how it ended free upgrades to select individuals. The carrier is expected to end 2014 with a profit, reversing the trend of past years, he said.

As eyes are fixed on San Miguel’s next investments, which may include British snacks maker United Biscuits, Ang insisted that San Miguel is in a stronger position now that it has completed changes to its traditional foods and drinks business model.

“What is important is the situation today is so good for the company,” Ang said of the company’s sales, which hit about P750 billion last year against P148 billion in 2007. “What [other] company is like that?”