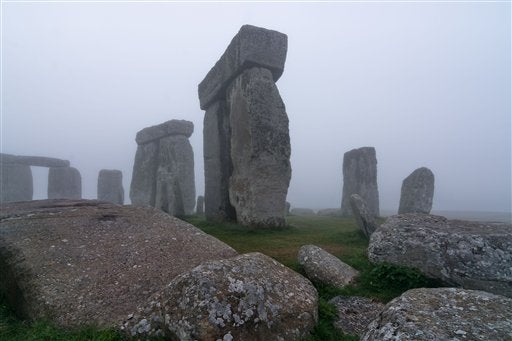 LONDON — There is more to Stonehenge than meets a visitor’s eye.

Researchers have produced digital maps of what’s beneath the World Heritage Site, using ground-penetrating radar, high-resolution magnetometers and other techniques to peer deep into the soil beneath the famous stone circle.

The project produced detailed maps of 17 previously unknown ritual monuments and a huge timber building, which is thought to have been used for burial ceremonies, Birmingham University said Wednesday.

“New monuments have been revealed, as well as new types of monument that have previously never been seen by archaeologists,” said Professor Vincent Gaffney, the project leader.

The project also discovered big prehistoric pits, some of which appear to be aligned with the sun, and new information on Bronze Age, Iron Age and Roman settlements and fields, the university said.

Professor Wolfgang Neubauer of the Ludwig Boltzmann Institute for Archaeological Prospection and Virtual Archaeology in Vienna says the new maps makes it possible “for the first time, to reconstruct the development of Stonehenge and its landscape through time.”

Archaeologists and others have been digging and theorizing at Stonehenge since the 1620s. The monument, 85 miles (140 kilometers) southwest of London, attracts more than 1.2 million visitors a year —including, last week, President Barack Obama.

The universities of Nottingham, Bradford and St. Andrews in the U.K., and the University of Ghent in Belgium were also involved in the project.