Making a speech? Take a cue from actors 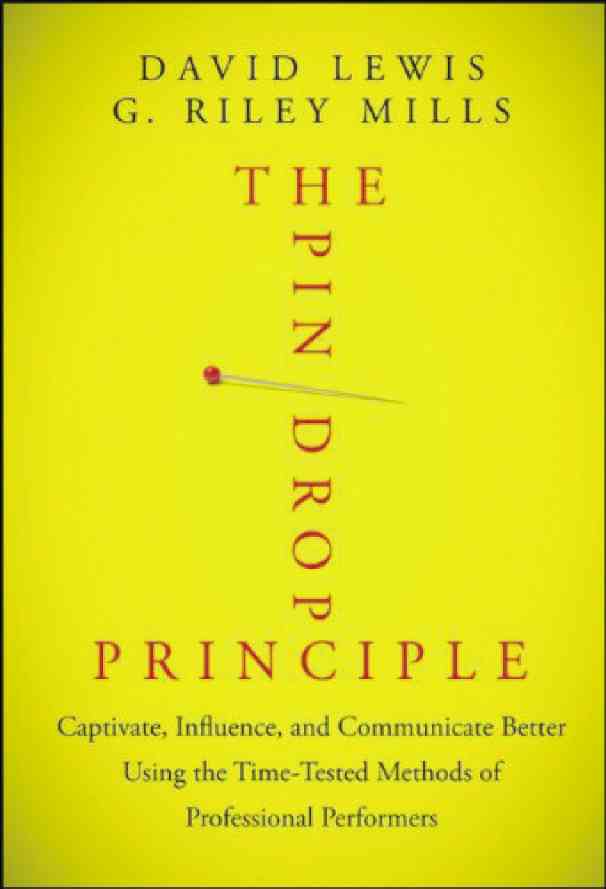 Every minute, across the globe, someone is speaking or acting on a stage—dazzling some people with his antics, afflicting his congregation with fire-and-brimstone speeches, cajoling them to take advocacy action on a social evil—or boring them to death with ill-prepared statistics that waste everyone’s valuable executive time.

As for you, dear reader, you may be called upon anytime to make a toast at the wedding night of a best friend, make an introductory speech for your boss before visiting executives—or, simply, tell a story on your first adventure reaching the peak of a mountain.

There are only two possibilities:  You will end your speech a rousing success—or a dismal failure.

The advice—never leave this “very public” act to chance—is a suggestion worth its weight in gold. And, honestly, you want to follow such a piece of advice—solicited or not! But, where do you begin?

You can begin by reading this book, “The Pin Drop Principle,” jointly authored by  corporate executives and professional actors David Lewis and G. Riley Mills.

I like the phrase “pin drop.” It tells me that—face-to-face with public performance which is compelling—you are awed, your mouth agape, you hear your heartbeat … and, yes, you can hear a pin drop!

This might be an exaggeration, but this book—which is supposed to be advancing the principles of acting on stage—gives you insights and details about public speaking, yes, through the “eyes” of actors.

In Pin Drop, “every aspect of communication is filtered through a unique lens”— from the perspective of actors.

It’s not only about acting. It is about engaging the audience. The book cites Ronald Reagan, one of the most popular Presidents in US history. Reagan was actually dubbed “The Great Communicator” by the press because of his impressive skills as a speaker and influencer. (Of course, it helped Reagan a lot that his speechwriter was Peggy Noonan, whose book, “Speaking Well,” was featured in Executive Read close to a decade ago.)

And what is it about acting that Reagan remembered in public speaking? “The actor knows two important things,” Reagan once said—“to be honest in what he is doing and to be in touch with the audience.”

“Business Is Show Business” is the title of the book I read much earlier, making me call to mind my days allied with an advertising company (I provide the public relations component). I watched and was impressed, for example, by an associate named Manny Gutierrez who made such a show out of an advertising presentation—using oratory, suspense, voice inflection to deliver the theme of a celebrated advertising campaign— “Ibalik ang swerti!” (Bring back luck) for a bank.

Business is show business. Steve Jobs reportedly worked on his presentation many times over before launching a version of Apple Mac or the iPhone. His entire performance looked effortless, but it was actually a result of much preparation—perfecting every pause and every detail.

The book deals with major and minor aspects of speech making, which many books on delivering speeches miss. One is “creating a first impression.” I recall an advice of a friend and associate Marlene Ochoa, who said: “Dante, prepare your first few lines for an arresting beginning.”

The book precisely suggests this, quoting Erica Daniels, who is associate artistic director of the Tony Award-winning Steppenwolf Theatre in Chicago. Ms Daniels has auditioned and cast thousands of actors over the years.

Her valuable advice: “You have a very short time to create an impact with an audience, seven to ten seconds. And the clock starts ticking the moment you walk into a room. If you are not 100 percent present in your communication, the authenticity is lost and you don’t engage. And without engagement, you remove your listener from the moment, meaning everything you say will probably be forgotten as soon as you walk out the door.”

Then there’s “The Pinnacle Matrix”— which are actually two concentric  circles— with the center ring, or bull’s eye, representing the heart and soul of great communication: Intention and Objective.

They comprise the “spark that transforms communication from good to great,” the book declares. The Matrix has three elements—Material, Preparation and Performance. Please note that “performance” is always present in the book’s formula.

How do you express your intention? Say it as a verb, they say—dazzle, excite, tease, unnerve, urge, cajole, soothe, engage, or intimidate. I recall an advise to preachers:  “Comfort the afflicted, and afflict the comfortable!”

It has been variously prescribed that “telling a story” is an important element in any speech. It should not be pure exposition, not a bland essay. Use the power of narrative in your speech.

The two actors—and authors—volunteer a “story map” for you to consider. It is made up of:  Exposition, Inciting Incident, Rising Action, Climax, Falling Action and Resolution.

The part, Inciting Incident, points to a speech part that holds the key to being interesting. As the authors define it, inciting incident is the “initial trigger or event that gets the story started, and without which nothing happens. It may also set up a conflict between opposing forces and define the antagonist of the story—the person or obstacle standing in the way of the hero’s efforts to reach a goal.

Don’t miss an account on the Gettysburg Address of American President Abraham Lincoln, delivered in less than three minutes. The speaker before him was Edward Everett, who spoke for two hours with a whopping 13,607 words. That was in July 1863. The powerful speech with compelling narrative was that of Lincoln.

What is the final advice of the book authors? Read through the book—practice, drill, and practice. And then, they suggest: “Get out there and be amazing.”

Read Next
Pizza maker heats up market with appetizing promos
EDITORS' PICK
What to expect as Metro Manila starts ‘no vaccination, no ride’ policy on Monday
Metro Manila’s daily COVID-19 growth rate drops to 2% — Octa Research
Over 3 Million worth of prizes to be won at Smart Padala’s SENDali Manalo Promo!
SMDC’s Bloom Residences: A master planned community that cares for your health and wellness
COVID-19 cases in PH pass 3.2 million mark with 37,154 new cases — DOH
Upsilon, Unilever give ‘real talk’ on climate change crisis
MOST READ
IATF protocols now apply to travelers who arrived on or before Jan. 13
‘Not my loss’: Did Kris Aquino just comment on her breakup with Mel Sarmiento?
Thailand records first Omicron death
Tito, Vic and Joey still not quitting, breaking trends as they celebrate 50th year in the biz
Don't miss out on the latest news and information.