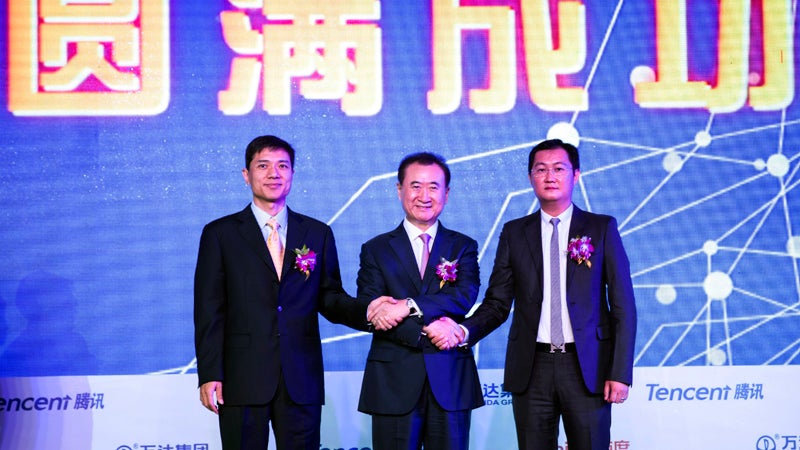 The three companies said they will integrate online and offline selling, with e-commerce services in Wanda’s 107 shopping malls, as well as its hotels and resorts. They said they would invest 5 billion yuan ($814 million) to start.

The venture adds to competition for Alibaba, whose Taobao, Tmall and other platforms account for some 80 percent of Chinese online commerce. The company is preparing for a U.S. initial public offering that analysts say might value it between $150 billion and $200 billion.

The new venture will develop services including online finance, the owners said. That could pose a challenge to Alibaba’s popular banking service, Yu’ebao.

China is the world’s most populous Internet market, with more than 600 million people online. The consulting firm McKinsey has said online shopping might triple from 2011 levels to $400 billion a year by 2015.

Wanda will own 70 percent of the new venture, the Wanda E-Commerce Co.

The development of such online-to-offline, or O2O, models is “an inevitable trend” in e-commerce, said the CEO of Wanda E-Commerce, Dong Ce, in a statement. He said the joint resources of the three owners should make the company the biggest of its kind.

Tencent also owns a stake in JD.com, China’s second-largest e-commerce company. Tencent has launched ventures to integrate e-commerce and online finance services with WeChat, which it says has more than 400 million active users.

Alibaba, Baidu and Tencent are increasingly intruding into each other’s core businesses. They have spent more than $7 billion since the start of 2013 to acquire or launch e-commerce, entertainment and other ventures.

Wanda said it estimates its shopping malls and other outlets will attract 5 billion customers a year by 2020, making the company the “world’s largest offline commerce platform.”

Dong said the company expects to sign up 40 million e-commerce users this year and increase the total to 100 million by next year.

Read Next
San Miguel Beer expands sales to southwestern US
EDITORS' PICK
‘Justice will be done,’ Duterte assures as he vowed probe on Jolo incident to bare ‘truth’
DOLE: Return of OFWs’ remains from Saudi to be ‘delayed,’ deadline moved to ‘early next week’
EuroMillions Superdraw: A lottery draw unlike any other is coming to the Philippines
Current dominant strain of COVID-19 more infectious than original—study
Smart releases Hyun Bin’s second TVC
Water remains our saving grace right now
MOST READ
Duterte tells military: No other president looked at you the way I did
BREAKING: Duterte signs anti-terror bill into law
Locsin warns of ‘severest response’ if China’s army drills in SCS ‘spill over’ to PH domain
Vico: Cleanup of bidding process saved Pasig gov’t P415M
Don't miss out on the latest news and information.