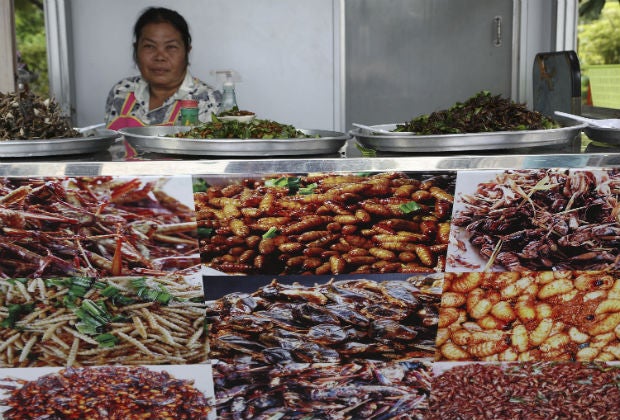 In this photo taken Aug. 5, a woman sells fried insects at a stand decorated with photos of various kinds of fried insects at a gas station in Nakhon Ratchasima province, northeastern Thailand. Six-legged livestock, as the U.N. Food and Agriculture Organization calls them, are also easier on the environment than their lesser-legged counterparts. AP

THANON NANG KLARN, Thailand—Depending solely on the rains to either yield a good rice crop or leave their fields dry and barren, farmers in this village in northeastern Thailand, the country’s poorest region, led a precarious and back-breaking existence. Then they discovered bugs.

At Boontham Puthachat’s home, six concrete pens seethe with crickets munching on chicken feed, pumpkins and other vegetables—treats to fatten them up before they are harvested and sold to hungry humans increasingly eager for a different type of dining experience.

“We haven’t become rich, but now we have enough to better take care of our families,” Boontham says proudly. “We are self-sufficient.”

Boontham’s family is one of 30 in this village raising mounds of the profitable crisp and crunchy critters in their backyards, satisfying a big domestic appetite for edible insects and a slowly emerging international one in countries where most diners would rather starve than sample fried grasshoppers or omelets studded with red ant eggs.

Replicated across Thailand, these enterprises have spawned a multimillion-dollar industry with more than 20,000 registered farms, most of them small-scale household operations, according to the UN Food and Agriculture Organization (FAO).

Averaging an annual output of 7,500 tons in recent years, the Southeast Asian country leads the world in producing insects for the dining table.

While it may still seem exotic, if not outright repulsive, to many in the Western world, the FAO points out that insects have long been an integral part of human diets in nearly 100 countries, particularly in Asia, Africa and Latin America, with more than 1,600 species consumed.

In China, the use of insects for food and medicine goes back more than 5,000 years. In recent times, cockroach farming has flourished, with some entrepreneurs getting rich by selling dried cockroaches to companies producing cosmetics and traditional medicines.

Besides generating extra income, insects have proven nutritious and farming them is easy on the environment, according to a 2013 FAO report.

“Eating a few insects is like taking a multivitamin,” says Patrick B. Durst, a senior FAO official who coauthored a study on Thailand’s edible insect industry.

A 6-ounce serving of crickets, for example, has 60 percent less saturated fat and twice as much vitamin B-12 as the same amount of ground beef. Farmers don’t use antibiotics or growth hormones and—unlike crabs and lobsters—edible insects don’t feed on dead animals.

And when one suppresses any psychological and cultural biases, many insects taste just fine. This reporter found crickets nicely crisp and nutty (a cross between shrimp and almond), and fried bamboo worms not unlike unsalted potato chips.

Palm weevils, to some palates, are likened to bacon soup with a chewy, sweet finish, while insect larvae are rich and buttery. “Mushroomy” is another frequently used description for some species.

Although a decade ago, insect eating was largely a gimmick—such as a bug embedded in a lollipop—experts say a recent increase in interest in the West is being driven by health and environmental concerns.

Energy bars made from ground-up crickets are now found in some health food stores in the United States, and the first cricket farm is scheduled to open in Youngstown, Pennsylvania, this year.

In San Francisco, the Don Bugito Prehispanic Snackeria can whip up a five-course, all-insect dinner including ice cream with mealworms. A bar in Paris serves insect tapas and a London start-up, Eat Ento, features honey caterpillar and vegetable wraps.

“When I was growing up in the United States, most people would turn up their noses at sushi. Now, it’s very chic. People’s eating habits do change, so who knows? In 10 to 15 years, eating insects may take off and be regarded as good and cool,” says Durst, whose favorites include fried wasp and some crickets with his beer.

Durst is cautious about predictions that edible insects will stave off hunger in parts of the world, but he believes that as a food supplement, these six-legged creatures could become an important component of food security.

In countries as far apart as Laos and Ghana, projects are underway to combat malnutrition with insect farming. And there is major growth in the breeding of insects for feed at fish and poultry farms and for bio-security through the release of some species to combat pests.

In Thailand, many people—not just the rural poor—simply enjoy eating some of the 200 different species on offer. Large quantities must be imported from Cambodia, China, Laos and Burma (Myanmar) and domestically often fetch higher prices than chicken, beef or pork.

This is all good news for farmers like 47-year-old Boontham, who started his business four years ago with a modest capital investment, relatively low-cost input such as cricket feed and little physical labor. He now reaps an annual profit of about $3,000.

A neighbor, Chalong Prajitr, says she was able to send her son to university thanks to the extra annual income of $5,000, a considerable sum in northeast Thailand, where annual per capita income is estimated at about $2,200.

“In the past, people depended on rice farming for their source of income. But we get only one harvest a year, while you can harvest crickets once every two months,” Boontham says.

And without an irrigation system in the area, a year of drought could spell disaster for farmers. “Crickets,” he says, “are less risky.”

To boost their business, the village cricket farmers have formed a loose cooperative to share information and facilitate marketing.

They also receive help from local authorities and Khon Kaen University, a major center for research on edible insects and efforts to export them, developing products like crickets with Mediterranean herbs and bamboo worms flavored with sour cream.

British businessman Graeme Lee Rose and his Thai wife have seen their own export business to Europe, the United States and Australia grow in recent years, especially for cricket powder used in energy bars and biscuits.

“There’s been quite a bit of interest and we see a lot of potential but it’s not something people are going to be throwing on the barbecue,” Rose says. “It’s not going to replace steaks.”

Benefit of bees even bigger than thought—food study