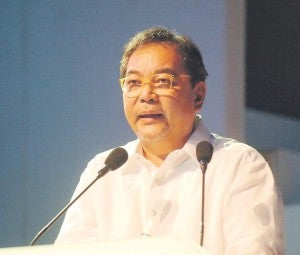 MANILA, Philippines—Some 2.4 million foreign tourists arrived in the country in the first six months of 2014 with government on track to reach its target of 6.8 million arrivals this year, Tourism Secretary Ramon Jimenez Jr. told lawmakers on Thursday.

At the hearing of the Department of Tourism’s (DOT) proposed P2.2 billion budget before the House of Representatives appropriations committee, the official said foreign arrivals were already ahead by 4 percent from the same period in 2013..

In 2013, some 4.7 million foreigners visited the country, slightly higher than the 4.3 million the year before. But it fell short of the target of 5.5 million due to the earthquake in Bohol and supertyphoon “Yolanda” (Haiyan) in Eastern Visayas.

Jimenez said he believed the target for 2014 would be reached.

“We believe we’ll have a very robust peak season in September,” he said.

“I worry all the time, but conditions are good due to the easing of bottlenecks in gateways, and the easing of anxieties brought about by typhoons. It’s going to be close,” Jimenez said.

The country has lagged behind its neighbors in terms of attracting foreign tourists. In 2012, Malaysia attracted 25 million; Thailand, 22.3 million; Singapore, 14.4 million; Indonesia, 8 million; and Vietnam, 6.8 million.

But Jimenez said tourists were spending, on average, more in the Philippines compared to its neighbors.

“We closed 2013 with an estimated 44 million travelers. It’s applying pressure on the capacity of our local airlines,” which would need more aircraft to accommodate demand, Jimenez said.

The DOT proposed a budget of P2.2 billion for 2015, including for its two attached agencies, the Intramuros Administration and the National Parks Development Committee.

This is 7.8 percent higher than the P2 billion budget this year.