Meeting with ‘Tatang’ makes all the difference for SM Prime CFO 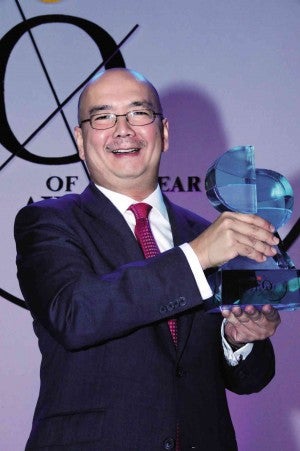 For SM Prime Holdings Inc. executive vice president Jeffrey Lim, the key moment in his professional career came early in his relationship with what is now the country’s wealthiest family.

Decades before Henry Sy Sr. topped the Philippines’ list of billionaires, Lim already had the rare opportunity to spend “face time” with the man who would transform the retail experience of ordinary Filipinos.

And one such face-to-face meeting with “Tatang”—as his closest associates fondly call him—was particularly valuable for Lim, who was then a junior recruit in the Sy’s fledgling business empire.

In an interview with the Inquirer, Lim recalled that he was once wooed by another family-run corporation, which had unveiled expansion plans after teaming up with a US corporation.

The year was 1990 and the “Shoemart” property group (as it was known then) was nowhere near its present status as Southeast Asia’s largest integrated property group—a real      estate group with market capitalization of over $10 billion.

The company that wanted to “pirate” Lim felt he was the perfect candidate because he had experience with a similarly family-run company, as well as experience with US firms, having spent some years with the multinational Unisys IT firm in Hong Kong.

The offer was attractive and he was tempted. So he decided to consult a close friend who urged him to bring the matter to Teresita Sy-Coson, the eldest child of the family patriarch.

“I’ll talk to Daddy,” she replied. The following day, Lim was summoned to the office of Sy at the old Makati Stock Exchange building.

“Mr. Sy asked me to close the door, so I knew he was going to talk to me about my plan to leave, because he never closed the door to his office, even during other important meetings,” Lim said.

“How many people have you told about this?” Sy asked Lim.

Apart from Sy’s daughter, Tessie, and the son of Sy’s business partner, no one else knew about it, Lim reported.

“How long have you been with me?” he went on to ask, perhaps rhetorically.

Lim then said he had been with the group for five years.

“How old are you?” he continued, again rhetorically.

Sy went on: “Do you know that I have already been through a number of [Philippine] presidents? And I started with a department store in Quiapo. Now that the business is starting to grow, there are a lot of people—presidents and government officials—who want to talk to me. There are companies who want to invite me [to do business with them].”

Sy then pointed out the obvious to the young and impressionable Lim who would one day become a key official in his property empire: “You are less than 40. And at this young age, you are already talking to me.”

What Sy meant to say was that Lim has rare direct access to the patriar.

“Don’t waste this precious commodity,” Lim recalled Sy as saying. “When the fortunes of my business rise, you will come with me. You have not learned everything yet. You still have a lot to learn. Stay.”

“Coming from Mr. Sy at that time, we didn’t even talk about him matching the salary offered by the other company,” Lim said. “I told him: ‘Tatang, if that’s what you want, I’ll stay.’ That was the end of the discussion.”

And it was a decision Lim has clearly not regretted.

After a three-year hiatus from the SM group for a stint as an expatriate executive in Hong Kong, Lim returned to the SM group in 1994 as an upstart property firm named SM Prime went public that year.

“It was a very flat organization,” he said. “There were only five or six of us so we gave ourselves titles. So they made me vice president for finance.”

Since then, however, SM Prime has grown by leaps and bounds.

It is now the country’s largest mall operator with 49 shopping complexes around the country, and several more in key cities in China.

From being a ‘mere’ chief financial officer of SM Prime, Jeffrey Lim has evolved into a strategic planner for the largest property developer in Southeast Asia. As the company’s executive vice president, he is responsible for executing the vision of the Sy family.

It recently underwent a consolidation process where other SM property operations—residential, office, commercial, hotels and leisure units—were folded into a single entity listed on the stock market.

The result was not only the largest real estate firm in the Philippines (its latest market capitalization of P447 billion narrowly edged out the P445-billion value of traditional rival Ayala Land Inc.) but also the largest in Southeast Asia.

At the nexus of this property group stands Lim who is tasked with coordinating the moves of various property units in the Sy empire, as well as serving as implementor of the various mandates set by the six children of Henry Sy—six leaders who have their own particular styles of doing business, their own personalities and their own temperaments.

Did he find this role challenging?

“You’re talking about different companies with different business heads,” Lim said. “They were … different. For the residential side, you had Henry Sy Jr., for the mall side you had Hans Sy, for the hotel side and conventions you had Betty Sy, among others. But now, we’re all in one group where the chairman is Henry Sy Jr. and the president is Hans. We’re able to manage this more effectively, plus the synergies we could generate from all the other businesses.”

For his role in helping the empire grow, Lim was recognized in 2012 as the country’s best CFO—chief financial officer—by ING Bank and Financial Executives Institute of the Philippines.

“For me, it was the highlight of my career as CFO. That’s why I consider this award important,” he said, betraying what looked like a touch of discomfort at being in the spotlight.

Lim is, after all, a soft-spoken man with a humble demeanor tasked with helping run a multibillion-peso property empire.

“That award started making a lot of people aware that I’ve been here for some time,” he conceded with some sheepishness.

Looking back, did Lim know that his early choices would take him to this point—a corner office overlooking the 60-hectare SM Mall of Asia complex on the edge of Manila Bay?

Did he know that SM would become this big?

“I knew that the group would become big,” he said. “If you have that experience of working with Mr. Sy, you will realize and see how long-term he looks at businesses.”

Lim recalled that the elder Sy once took him on a helicopter ride to survey a large tract of land they were considering for acquisition.

Flying over the property south of Metro Manila, Lim recalled saying: “Tatang, there’s nothing here.” Sy replied, “No, look around. Eventually, everything will converge here.”

Lim said Sy was proven right (as most of his business decisions have proven to be).

“It’s something you will not learn in business school,” Lim said.

While the elder Sy has retired from the day-to-day affairs of the conglomerate, his entrepreneurial spirit continues to guide his six children and the professional managers of the organization, Lim said.

This could only mean that the SM group would continue to grow in a symbiotic embrace with the growing Philippine economy.

Read Next
Think local, stay global strategy works for LINE
EDITORS' PICK
Rare earth metals at the heart of China’s rivalry with US, Europe
PNP, PDEA destroy P25.8M worth of marijuana in Kalinga
Kai Sotto continues to inspire Filipinos by sharing his passions and stories with Smart Prepaid
Alex Eala wins Grand Slam on Independence Day: ‘I hope I made my contribution to the country’
G7 rivals China with grand infrastructure plan
Ahead of ONE: Full Blast II, Mongkolpetch warns Elias Mahmoudi: ‘Watch out for my fists’
MOST READ
Groups slam Duterte ‘surrender’ to China
PH logs 7,302 new COVID-19 cases — DOH
1Sambayan names 6 choices to pit vs Duterte’s anointed in 2022
MVP steps into new role as top PLDT cheerleader
Don't miss out on the latest news and information.