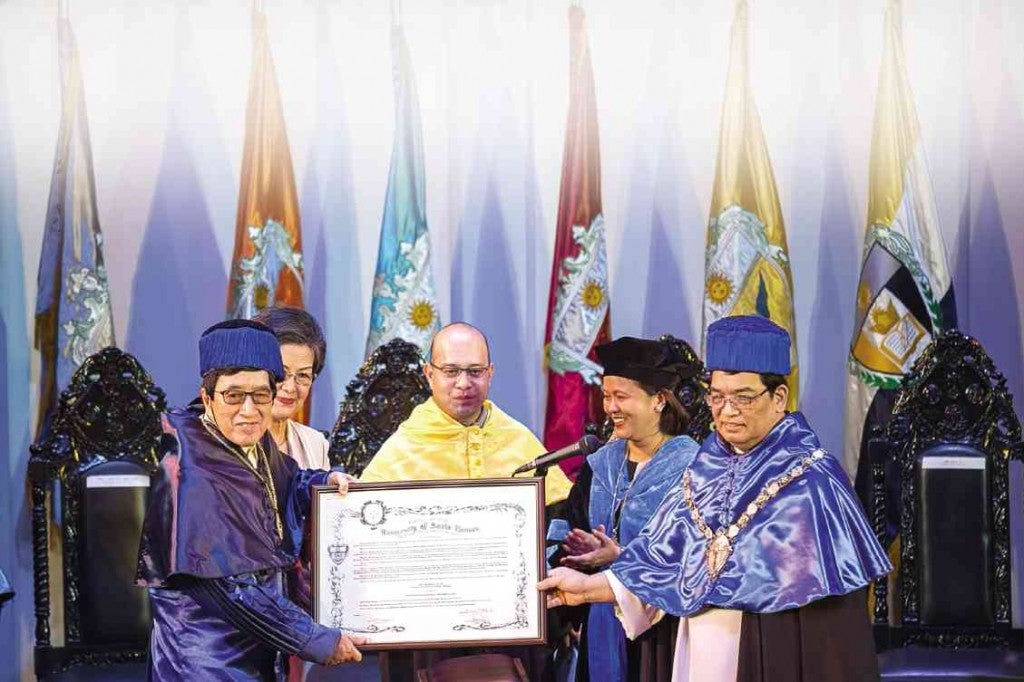 THE INDUSTRIALIST (left) receives an honorary degree from UST.

Without a college diploma tucked under his belt, it was, at first, a challenge for the Chinese-Filipino businessman to venture into banking.

But now, with the success of Metrobank and other ventures that marked his professional life, Ty looks back to acknowledge that school and life in general are the primary shapers of one’s destiny.

Fate has been kind to Ty.

Ty might not have finished the commerce course he took at the University of Santo Tomas (UST) as a young man, but the accomplished businessman eventually attained a much higher honor from the university last Thursday.

Ty, who founded and chairs the Metrobank Group of Companies, was conferred the degree of Doctor of Humanities, honoris causa, for his “immense contribution to nation-building through his equitable and sustainable business practices and leadership in corporate social responsibility, acting upon his dream of empowering Filipinos with better opportunities.”

The honorary doctorate from UST stands above other similar honors he received in the past.

The honorary doctorate degree “comes from the University of Santo Tomas, my school,” Ty says in his acceptance speech during a simple ceremony held at UST’s College of Medicine auditorium. “I stand before you humbled and grateful for the honor you bestowed upon me today.”

Ty was actually “not a very good student, in the traditional sense,” he admits.

“I had to drop out [of UST] when I was 18 years old, because I had to help my father put up Wellington Flour Mills which, back then, supplied one-fourth of the total requirements of the country.”

For someone who has proven himself across various industries—banking, automotive, power generation, insurance, real estate, education, health care, as well as hotel and tourism—Ty says that he “had to endure many hardships as a young businessman.”

For one, when he established the Metropolitan Bank and Trust Co. in 1962 at a “young and inexperienced” age of 30, he “had to go through a lot of difficulties,” Ty recalls.

It took three years before the then central bank issued him a license to operate.

Even though he was not able to complete his education, Ty still acknowledges the good things learning can bring.

“If there is anything I have learned in life, it is that education is very important. This is why, despite my own shortcomings, I made sure that my children were given the best education I could afford. And I am happy to see that their education has not been wasted,” Ty says.

Beyond the confines of school campuses, however, lies even greater lessons to learn, according to Ty.

“I have also learned that education comes in many forms. If you are lucky enough to have the time and money, you can go to a good school like UST and earn a degree. But you can also learn from life itself, with experience as your professor,” Ty explains.

For Ty, “experience can be a very hard, very strict teacher—sometimes even cruel. But the lessons you will learn from experience, you will never forget,” Ty points out.

Ty shares one of the “positive and good” lessons he learned from life: “If you go into business, there is nothing more important than trust. Like all good things, trust is not given. It must be earned. You must make sure to deliver on your promises. You pay your debts, and you borrow only what you can pay. You keep your word. You stay honest, and avoid scandal and shame. In other words, be a businessman with honor.”

This trust also has to be reciprocated, Ty adds.

“Aside from being trustworthy, the other key to good business is to trust others. A good businessman will always find good people he can trust.”

As such, Ty says he considers his tens of thousands of employees in the Metrobank group as his “friends.”

“They shared my dream… ultimately of a better society for all Filipinos,” he says of the Metrobank group workforce. “I suppose you can say that I made a deposit in my own bank—an investment of hope, an investment withstanding the test of time, an investment that will never be withdrawn. That is my legacy to the nation and to the future, and I am trusting you all to take good care of it.”

GT Capital, which serves as the primary vehicle for the holdings and management of the Ty family’s firms, is one of the biggest conglomerates in the country.

Last year, GT Capital posted a consolidated net income of P8.6 billion on the back of P105.5 billion in consolidated revenues across the banking, property development, auto manufacturing, power distribution, and life and non-life insurance businesses.

At the end of 2013, the conglomerate has total consolidated assets worth P192.4 billion. Total equity stood at P92.6 billion as of last year. Among the companies under GT Capital are Metrobank, Federal Land, Global Business Power, Toyota Philippines, Axa Philippines and Charter Ping An Insurance Corp.

The Metrobank group also has corporate social responsibility (CSR) arms actively engaged in philanthropic activities: Metrobank Foundation, GT-Metro Foundation Inc. and Toyota Motor Philippines Foundation Inc. The group’s CSR programs have contributed a total of P139 million in grants to hospitals and social services from 2009 to 2013, as well as infused donations worth P113.4 million for relief and rehabilitation efforts in calamity-hit areas between 2006 and 2013.

The Ty family’s net worth in 2013 stood at $2.6 billion—the sixth among the richest Filipinos in the country, according to Forbes Magazines.

Not bad for a dropout.

Read Next
Bohol tourism industry rising from the rubble
EDITORS' PICK
Cagayan gov endorses 10-day ECQ in Tuguegarao due to COVID-19 surge
Experience clearer calls nationwide with Smart VoLTE
No warrantless arrests despite DND-UP accord termination, says PNP spox
New Year, New Rediscoveries
Driving can be even more rewarding this New Year — here’s why
Biden team says US will not lift travel bans, despite Trump statement
MOST READ
Proposed toll for newly opened Skyway 3 ranges from P110 to P274
Duterte to firms: No franchise until you settle your accounts with gov’t
‘Hotbed of recruitment’: Lacson backs termination of UP-DND accord
Palace: Duterte’s ‘no payment of gov’t dues, no franchise’ remark covers all, even ABS-CBN
Don't miss out on the latest news and information.