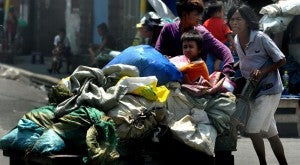 The administration has a chance to put the Philippine economy on an “irreversible” growth path that would see millions lifted out of poverty if the last two years of President Aquino’s term is used pursuing meaningful reforms.

Eradicating poverty might be within reach, World Bank officials said Thursday, if the government could take advantage of the country’s current stability to push for structural changes to make the economy work for a larger segment of the population.

“This government is definitely on the right track,” World Bank lead economist for the Philippines Rogier van den Brink said at a press conference.

The World Bank announced Thursday that it had revised forecasts for the Philippine economy’s growth downward, taking into account the slowdown in the first quarter of the year. The economy is now seen growing at 6.4 percent this year, lower than the previous forecast of 6.6 percent. Next year, growth is expected at 6.7 percent, lower than the older 6.9-percent projection.

Both forecasts are below the Aquino administration’s targets for both years, which were set at 6.5 to 7.5 percent in 2014 and 7 to 8 percent next year. Growth will be driven by remittance-fueled domestic consumption, government spending, the resurgence of manufacturing and booms in the tourism and business process outsourcing (BPO) sector.

Van den Brink noted, however, that despite the downward revisions, growth at these levels, if sustained, could result in gains that people can feel.

“Within one generation, you can definitely eradicate poverty,” he said.

He noted that between 2012 and 2013, the country’s poverty incidence declined by 3 percentage points to 24.9 percent. This translated to 2.5 million people no longer living on P52 a day—the official poverty line.

The recent improvement in the country’s employment situation—with unemployment falling to 7 percent in April from 7.6 percent the year before—indicated further improvement in poverty numbers.

To follow through on these gains, the World Bank said the government should spend its last two years implementing further reforms, ranging from simplifying the country’s tax regime to reducing the cost of doing business in the country.

Among others, he said, the government should cut the income tax rates for corporations and individuals to 25 percent from the current 30 percent and 32 percent, respectively.