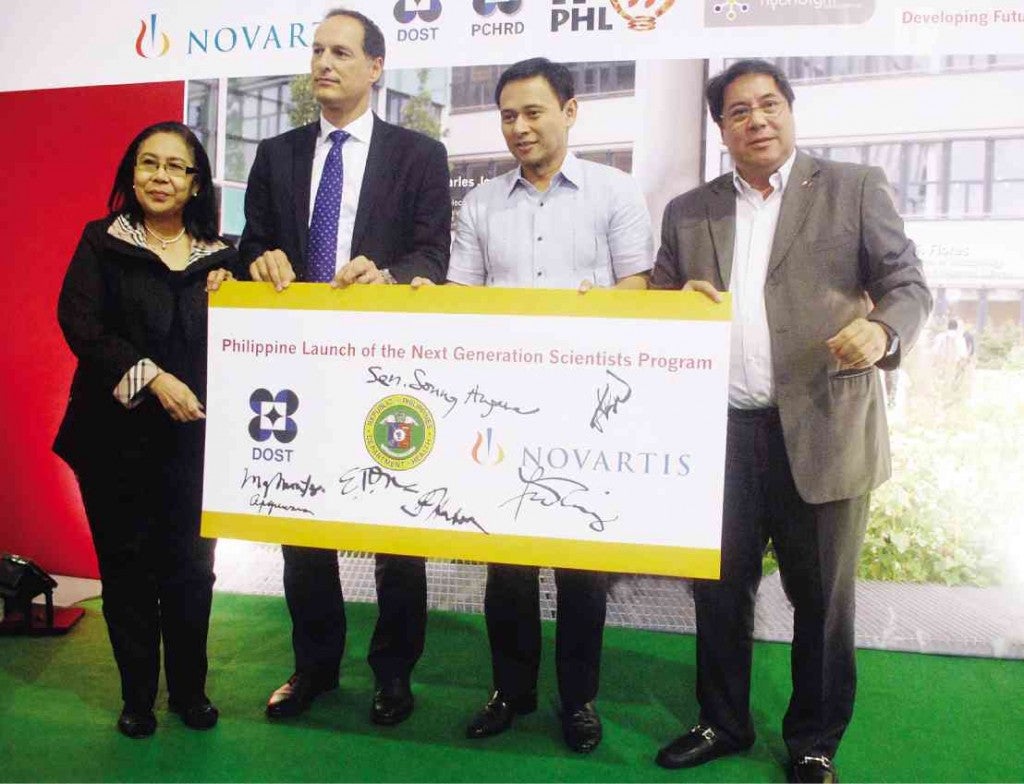 Arjelle Agupitan, a 21-year-old aspiring researcher, wanted to pursue a career in precision medicine for tuberculosis, a dreaded disease which according to the Department of Health kills 63 Filipinos every day.

A graduate of the bachelor in molecular biology and biotechnology (MBB) at the University of the Philippines Diliman, Agupitan is currently taking her master’s degree in the same field when she was urged to apply for the Novartis International Biotechnology Leadership Camp (BioCamp) 2014 by her fellow alumni at UP Diliman’s National Institute of Molecular Biology and Biotechnology (NIMBB). Her thesis adviser, Dr. Reyanaldo Garcia, who convinced her of joining the program, said it “was not only a chance to learn more about the biotechnology industry, but also to experience a different research climate.”

She is one of the five young Filipino scientists who will participate in the BioCamp on Aug. 24-27 at the Novartis campus, Novartis International Headquarters in Basel, Switzerland. The others are fellow UP MBB graduates Alvin Bello and Gerald Ryan Aquino, UP Marine Science Institute graduate student Jortan Tun and University of Sto. Tomas master in microbiology student Kin Israel Notarte. Their participation in the Novartis International BioCamp 2014 was announced during the local BioCamp last July 26 at the SMX Convention Center, SM Mall of Asia Complex, Pasay City.

The BioCamp in Basel is a three-day seminar that brings the biotechnology sector closer to talented students from top universities all over the world. It gives participants the opportunity to interact with key Novartis scientists; learn about new medicines addressing unmet medical needs; understand trends and challenges in biotechnology; receive firsthand experience on starting and running a biotech company; explore career option in their healthcare and biotech industries; and network with students from other countries and associates of Novartis.

Selection is strictly competitive; only 15 Filipino scientists have participated in the program. During the past years, only two Filipinos were sent to the International BioCamp, having only 60 slots for all countries.

This year though, five made it since the judges had difficulty choosing from them, given their sterling qualifications. “We couldn’t decide who among you will be going because we wanted all of you to go,” said Jaime C. Montoya, Philippine Council for Health Research and Development (PCHRD) executive director during the announcement of the finalists.

Agupitan, who strongly believes that biotechnology is key to national progress, said the International BioCamp will give “us a chance to interact with skilled and experienced professionals not only on the research side but also from sides in marketing, commercialization and product output, particularly in drug discovery.” She added that “the Philippines needs to establish a globally minded but socially geared research climate.”

Agupitan said: “Our country’s [science community] has a vast repertoire of untapped potential, if you look at the amount of basic research it’s churning out. To get it to the next level and apply it into a tangible product that will benefit the people, we need to go the extra mile. ”

First held in 2006, the local BioCamp is a joint initiative of Novartis and the DOST with the PCHRD, the Intellectual Property Office Philippines and biotechnology consulting firm Hybridigm Consulting Inc. “BioCamp workshops are designed to give participants the tools they need to start a biotech company,” said Dr. Nikolaos Tripodis, Novartis Healthcare Philippines president and managing director.”

During the same event, Novartis, for the first time in the country, formally announced the opening of nominations for the Novartis Next Generation Scientists program. A three-month internship at the Novartis research site in Basel, the program is intended to support talented and motivated postgraduate students by allowing interns to work on a precompetitive scientific or clinical research project they jointly agreed on.

Agupitan is hoping that the knowledge she will gain in the International BioCamp will help further her research in improving tuberculosis treatment to lessen risk of severe side effects among patients. “This is by no means easy to undertake. Like developing a drug treatment, this is a long-term endeavor.”

She said: “With research that is still on the proof-of-concept stage, like mine, there is a lot of knowhow and experience needed to take it to larger-scale studies and then to a tangible product. It will help put such endeavor into perspective and allow the establishment of a firm plan of action [for my research].”

Taking cue from Dr. Edsel Maurice Salvaña in his talk during the local BioCamp, she said “that it is in this case and other cases of infectious diseases, that the Philippines can be used as a model for other countries in disease control and response.”