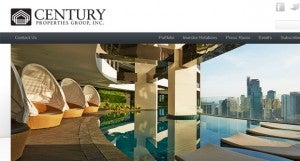 Century Properties said the Makati Regional Trial Court Branch 66, in an order dated July 25, granted its application for preliminary prohibitory injunction against the Okada group, prohibiting the Japanese group from executing a plan to terminate the agreements with CPG and from committing any acts that will make the agreements or any part of it ineffective.

The deal would have made CPG 36-percent owner of Eagle 1 Landholdings Inc., the holding firm that owns the 44-hectare estate within Pagcor Entertainment City where Okada’s gaming complex will rise. At the same time, CPG was set to build luxury residential and retail properties with over 300,000 square meters of gross floor area in a five-hectare site within the complex.

The court thus reversed an earlier ruling in May that had denied the injunctive relief prayed for by CPG after the latter’s filing of its motion for reconsideration.

This latest ruling also prevents the Okada group from dealing with any party with respect to any sale, disposition or original issuance of any class of the shares of stock of Eagle I and from “dealing with any other party for the development of the commercial/residential land and the commercial/residential project itself as contained in said agreements.”

CPG has filed a petition for interim measures of protection at the local court against Okada’s local affiliates Eagle I, Eagle II Holdco., Inc. and Brontia Ltd. It argued that the basis for Okada’s notice of termination was “unfounded” and was in violation of the spirit of the investment agreement that both parties signed last year.

A three-way partnership for the integrated gaming project collapsed after First Paramount Holdings 888, the third participant, backed out of the deal to acquire 24 percent of Eagle 1.

But CPG had argued that the withdrawal of First Paramount should not have rendered the deal ineffective, noting that the provisions under the investment agreement “provided alternative measures to exhaust all reasonable means for the said agreement to come to a close.”

Such measures include negotiating an alternative structure that will preserve the commercial terms of the agreement and replacing First Paramount with another qualified Filipino company to ensure the subscription of the preferred shares, CPG had said.