PSEi slips ahead of Sona 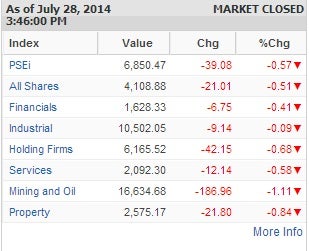 MANILA, Philippines—The local stock index slipped on Monday ahead of President Aquino’s State-of-the-Nation Address (Sona) alongside caution arising from the start of the so-called “ghost month.”

While most were attuned to the President’s Sona, Monday also was the first day of the “ghost month” period, during which Chinese investors deem it unlucky to make big ticket investments. This is also the period when many European investors take long summer vacations, thereby resulting in thin trading volumes across global markets.

At the local market, turnover was thin at P4.56 billion. There were 52 advancers against 121 decliners.

All counters ended in the red, led by the mining/oil counter which fell by 1.11 percent.

The PSEi was led lower by tycoon Andrew Tan’s Megaworld (-2.74 percent) and AGI (-3.72 percent). PLDT, Philex and RLC likewise fell by over 1 percent.

On the other hand, URC bucked the day’s downturn, rising by 1.12 percent. SMIC, Globe, GTCAP, Meralco and ICT also gained.