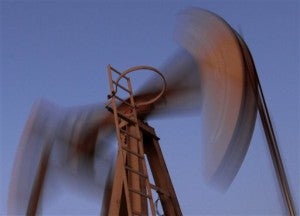 NEW YORK – Oil prices sank Thursday, despite some encouraging economic data in the US, China and Europe, as traders kept an eye on the Ukraine crisis and Middle East tensions.

The US benchmark futures contract, West Texas Intermediate for September, slid by $1.05 to close at $102.07 a barrel on the New York Mercantile Exchange.

Brent North Sea crude for delivery in September settled at $107.07 in London trade, down 96 cents from Wednesday’s closing level.

New claims for US unemployment insurance benefits, a sign of the pace of layoffs, tumbled to an eight-year low last week, the Labor Department reported.

Banking giant HSBC said its preliminary purchasing managers index of manufacturing activity in China, the world’s second-largest economy, rose to 52.0 in July from 50.7 in June, hitting an 18-month high. A number above 50 indicates expansion.

A survey by research firm Markit of eurozone business conditions said the PMI for the 18-nation bloc rose to 54.0 in July from 52.8 in June.

“Even the lowest weekly jobless claims number in the US since February 2006 is not enough to lift the crude complex into positive territory. After recent geopolitically sponsored support, crude is taking a breather,” said Matt Smith of Schneider Electric.

Carl Larry of Oil Outlooks and Opinions called it “a nervous market, playing very carefully,” with traders booking some profits.

Oil prices had risen on Wednesday after the United States reported a large decline in its crude inventories, indicating strong demand in the world’s biggest consumer of crude.

“We do not expect sustained (price) gains unless reports emerge of actual supply-side disruptions. The market is comfortably supplied with seasonal demand in Europe still slackening,” he added.