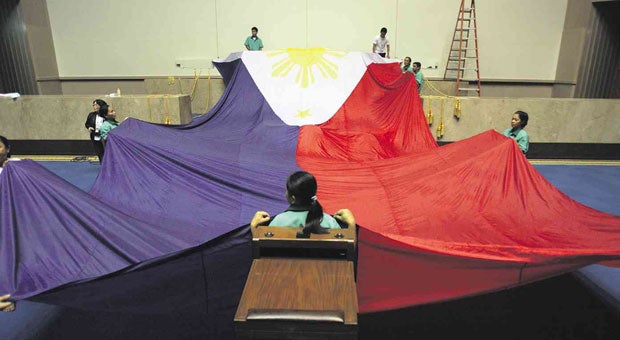 GEARING UP FOR SONA Workers spread the national colors at the session hall of the House of Representatives in Quezon City where President Aquino is scheduled to deliver on July 28 his fifth State of the Nation Address before a joint session of Congress. As Aquino’s Sona nears, the question has made itself relevant once more: Should the economic provisions of the 1987 Constitution be amended to make the local business environment more attractive to foreign investors? NIÑO JESUS ORBETA

MANILA, Philippines–Without a doubt, the Philippines has experienced a resurgence of investor confidence in the four years since President Aquino took over the reins of government.

Last year, the country registered one of the highest growth rates in Asia, second only to economic powerhouse China, despite the oft-cited hindrances to investments supposedly posed by a basic law crafted almost three decades ago under very different circumstances.

Thus, as President Aquino’s State of the Nation Address nears, the question has made itself relevant once more: Should the economic provisions of the 1987 Constitution be amended to make the local business environment more attractive to foreign investors? Should these changes be part of the President’s agenda to be laid out during his much-awaited annual address to the joint session of Congress?

“If you want more investments, you’ll have to lift some of the restrictions we currently have,” said National Competitiveness Council cochair Guillermo Luz. “For example, there are restrictions [to foreign investments] in media, education and advertising. Ownership in utilities is also restricted.”

Not surprisingly, these “forbidden fruits” are also the industries that foreign investors are most interested in, along with the capital-intensive infrastructure sector.

Yet, it could be argued that the country has exhibited these impressive economic growth rates in the more recent part of Aquino’s six-year term without the benefit of a liberalized Constitution. 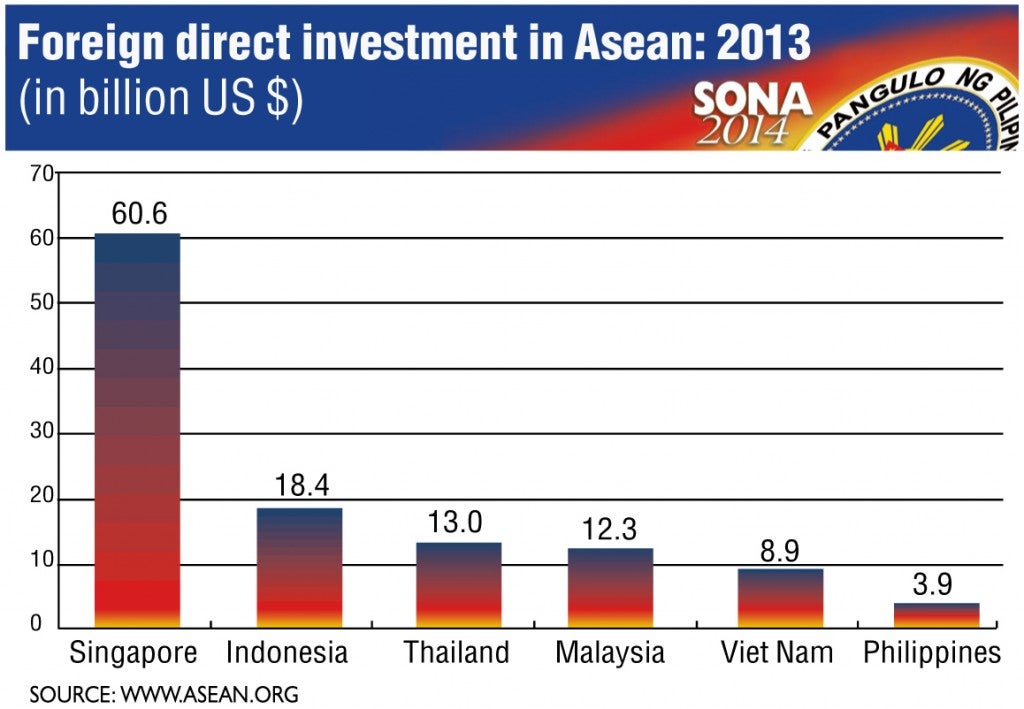 “We’re doing fine, but ‘fine’ is relative,” Luz said, explaining that the level of investments necessary to lift more Filipinos out of poverty may be beyond the ability of local big business groups to provide. “We’re doing fine compared with our past. But compared with competition around the region, we’re lagging behind.”

He cited the examples of Association of Southeast Asian Nations (Asean) neighbors like Indonesia, Thailand and even former laggard Vietnam, all of which receive annual foreign investment levels several times over what the Philippines gets even during its best years.

Yet Luz—the former executive director of the Makati Business Club (MBC)—takes a nuanced approach to the clamor to relax the economic provisions of the country’s most fundamental law.

“We have to look at this closely: Is ownership the one deal maker or deal breaker that makes investors decide to come here or not?” he said. “I feel there are other factors involved. Factors like the state of the country’s infrastructure and the cost of doing business, among others.”

Aquino has, time and again, expressed his opposition to amending the country’s fundamental law, which was ratified during the term of his mother, the late President Corazon Aquino.

But he does have economic advocacies that may benefit from a more liberal Constitution.

During his plenary speech at the 24th Asean Summit in Burma (Myanmar) on May 11, Aquino urged his fellow Asean leaders to consider growth and development of all sectors to ensure a high level of integration, cooperation and collaboration among the economies of the region.

“The Philippines will continue to give particular focus on the development of micro, small and medium enterprises as we need to embark on specific initiatives that would make the Asean Economic Community meaningful for them—and that would help them make the most of the opportunities growing in our part of the world,” the President said.

This is the very same point the head of the Philippine Chamber of Commerce and Industry (PCCI) raised. With over 20,000 registered members nationwide, PCCI is—by head count—the largest business lobby group in the country. But the bulk of its members are small and medium enterprises (SMEs), many of whom lack the clout and resources of the MBC to compete with a potential influx of foreign competitors.

“We’re OK with amending the Constitution’s economic provisions, but we have to calibrate our moves carefully,” PCCI president Alfredo Yao said. “Big companies and conglomerates can take care of themselves, but I’m concerned about our SMEs.”

Yao, who started his business empire with what was then a small packaged juice drink business called Zesto, said his mandate as PCCI chief was to help ensure the best business environment for SMEs, which comprise the bulk of registered firms in the country. 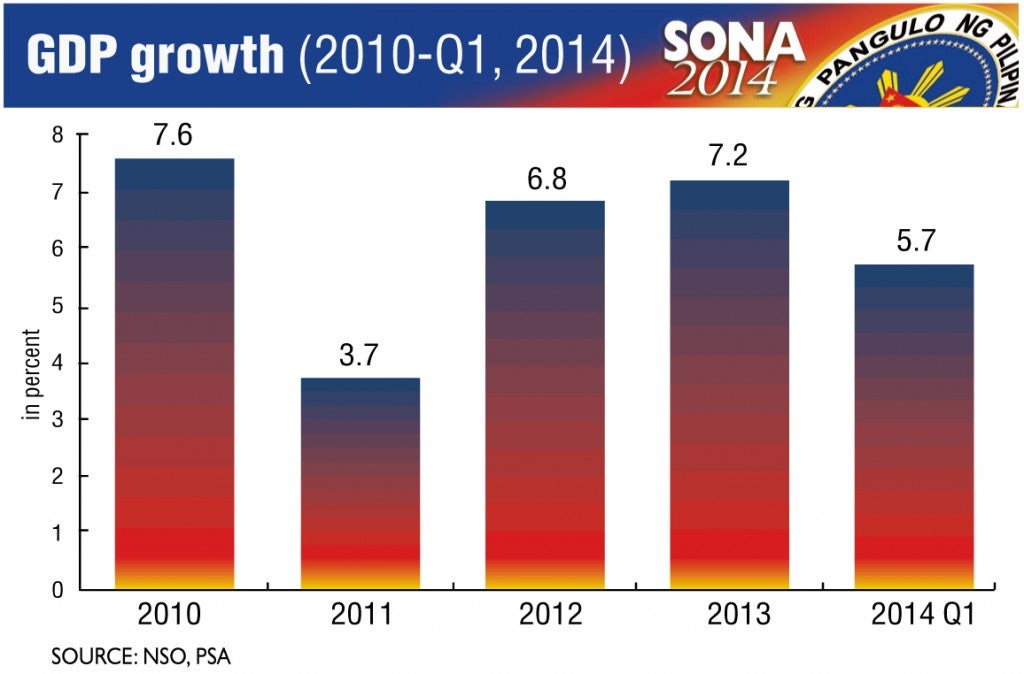 “We have to protect our SMEs,” he said, when asked about the possibility of giving foreign investors the ability to own more local corporations, as well as real estate.

“Look at China. Look at Indonesia. These countries have ownership restrictions as well,” Yao said. “But they have more foreign investments. There must be another factor involved.”

Hearing the arguments presented by the likes of Luz and Yao, the debate also sounds like one between big and small firms.

Yet, common ground is emerging in the debate on the Constitution’s economic provisions—a debate that has been raging since the mid-1990s, when local leaders wondered whether the economic boom of the Ramos years could be expanded further through the lifting of restrictive nationalistic policies.

“There is no firm consensus at this point [as to the nature of the liberalization needed], but we all agree that we need more flexibility,” MBC executive director Peter Perfecto said, describing efforts among various business groups to present a united stand on amending the Constitution.

He explained that more advanced industries were willing to see foreign ownership restrictions lifted faster than SMEs which are considerably less sophisticated in their business practices.

Perfecto pointed out, however, that simply amending the Constitution to relax the 40-percent foreign ownership limit on certain industries, or to allow foreigners to own land, was not the be-all and end-all of efforts to improve the local economy.

Persistent issues, like the country’s poor infrastructure, expensive electricity and high cost of doing business, are equally important to investors when they choose between the Philippines and Thailand in locating, for example.

“We all agree that relaxing restrictions of the Constitution is just part of a bigger package,” the MBC official said. “Other elements are just as important.”

On this point, all three business leaders agree. Efforts must be exerted on all fronts for the Philippines to move forward, and for the lives of more Filipinos to be improved.

“There is no one silver bullet,” Perfecto said.

Employers push for removal of restrictions on foreign investments

Business groups back moves to amend economic provisions in Constitution