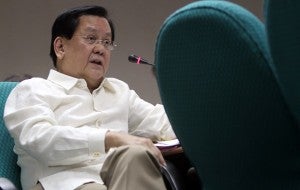 MANILA, Philippines–To deal with a potential power crisis, President Aquino should be given the power to set up special zones for power plants, and not emergency powers, Sen. Sergio Osmeña III has said.

Given that power plants take at least four years to build, Osmeña said that the President should be granted powers to order the immediate construction of such plants, free from any legal obstacles.

“There is one power that I am curious if it would be reasonable and constitutional: the power for the President to declare special zones immediately for the construction of power plants,’’ Osmeña told reporters Monday afternoon.

With such power, he added the President could issue the order: “Within three months, start the power plant.’’

The senator, who chairs the energy committee, said the construction of power plants has often been delayed by petitions for writ of kalikasan and lengthy processing of local and national government permits.

Energy Secretary Jericho Petilla has talked the President into declaring a state of emergency in view of a power supply problem in the first quarter of 2015.

Citing the energy outlook for Luzon in 2014-2016, Petilla said that contingency reserves would run below the minimum level set by regulators in the middle of March next year.

In view of this, Petilla asked Aquino to invoke Section 71 of the Electric Power Industry Reform Act (Epira), which has authorized the President to ask Congress for authority to establish additional generating capacity upon the determination of an imminent shortage of power supply.

The President has yet to act on Petilla’s proposal.

“What type of emergency powers does he propose the president obtain from Congress? You can’t build a power plant in less than three and a half years, unless you bring in generators, power barges,’’ he said. “What powers do you want now?’’

“But as I said, it’s not necessary. They should keep on developing,’’ he added.

Trillanes has filed a bill prescribing urgent measures to address the electric power crisis, such as authorizing the President to enter into negotiated contracts for the construction, repair and maintenance of power plants, and to compel independent power producers to supply power to distribution utilities, among others.