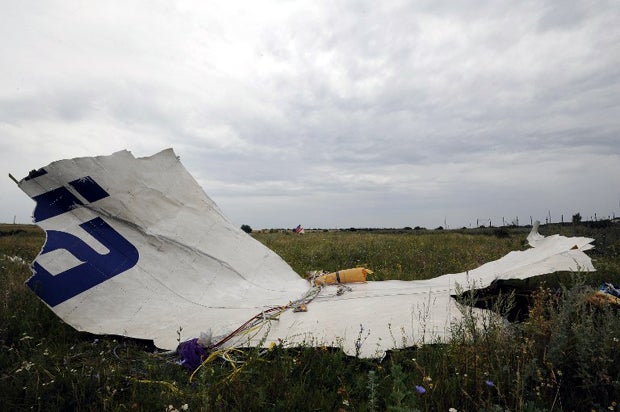 A piece of wreckage of the Malaysia Airlines flight MH17 is pictured on July 18, 2014 in Shaktarsk, the day after it crashed. Flight MH17 from Amsterdam to Kuala Lumpur, which US officials believe was hit by a surface-to-air missile over Ukraine. AFP

LONDON – Global stock markets slid on Friday after the crash of a Malaysian Airlines jet which killed 298 people over rebel-held eastern Ukraine, amid signs it was hit by a missile.

Russian shares and the ruble sank, as the disaster dramatically raised tensions between the Kremlin and the West.

The investment climate was already heavily clouded by broadened US and EU sanctions linked to Ukraine.

Sentiment was also rocked as Israel launched a ground invasion of Gaza, with tanks and warplanes sweeping into the area in a bid to stop rocket fire.

The heightened geopolitical tensions sent traders fleeing risky assets such as equities and into safer investments like gold, US bonds and the yen.

European equity markets, which had already fallen late on Thursday as news of the crash broke, extended losses in late morning Friday deals.

London’s benchmark FTSE 100 sank 0.63 percent to 6,696.85 points, despite gains for drugmaker Shire Pharmaceuticals which agreed to a $54-billion takeover from US giant AbbVie.

The euro meanwhile hit a February low against the safe-haven Japanese currency at 136.71 yen.

“Geopolitical tension was also elevated as Israel launched a ground offensive into Gaza.”

He added: “Investors fled shares for the perceived safe haven of US government bonds and gold, while the price of oil also climbed.”

Meanwhile, the IMF said that the Ukrainian economy was being unexpectedly badly damaged by the crisis, and said it now expected the economy to shrink by 6.5 percent this year instead of 5.0 percent.

Airline stocks in Asia retreated, led by a slump in already under-pressure Malaysia Airlines as the company faced up to its second major disaster in four months.

Shares in Malaysia Airlines tumbled by as much as 17.8 percent on the news, which comes months after Flight MH370 went missing with hundreds on board in a remote part of the Indian Ocean.

In Moscow, the ruble-denominated Micex stock index fell by 1.67 percent, and the dollar-based RTS index was down 2.23 percent.