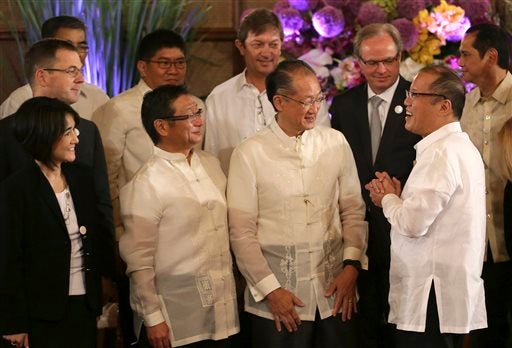 MANILA, Philippines — The World Bank said Tuesday that it and its private sector arm have committed concessional loans of up to $4.2 billion to the Philippines to help the country reduce poverty, create jobs and sustain growth as it recovers from the impact of a devastating typhoon and separatist rebellion.

The World Bank will provide $3.2 billion in development financing to the Philippine government, while the International Finance Corp. will offer another $1 billion for investment in business and industry under a 2015-18 aid program, World Bank President Jim Yong Kim said.

Kim had announced a day earlier that the World Bank Group was planning a separate $528 million rural development project this year to boost the income of farmers and fishermen, including $62 million for areas hit by Typhoon Haiyan last year.

“I am here to reaffirm the World Bank Group’s support for the courageous Filipinos who are rebuilding from the ruins of Typhoon Haiyan,” Kim said in a statement after visiting Tanauan, a town in central Leyte province that was heavily damaged by the massive typhoon.

Kim, who was on a two-day visit to the Philippines, said the rural development project fund includes $119 million for roads, bridges, and irrigation and potable water systems in the turbulent southern Philippines, including areas where decades of fighting between Muslim rebels and the government have displaced hundreds of thousands of people and hindered growth in the resource-rich region.

The government and the main Muslim separatist group, the Moro Islamic Liberation Front, signed a peace accord in March in which the rebels agreed to greater autonomy instead of independence.

Kim noted that the conflict-affected regions are among the poorest in the Philippines, crippled by a poverty rate of over 50 percent, or more than twice the national average. “Our support for the peace process is in line with our goals of ending extreme poverty and building shared prosperity,” he said.

The Philippines posted a first-quarter growth rate of 5.7 percent, down from 7.7 percent for the same period last year and 6.3 percent in the last quarter of 2013, due largely to the impact of Haiyan and an earthquake during the last quarter of last year. Despite the disasters, the Philippines was still Asia’s third-fastest growing economy during the quarter, behind China and Malaysia.

Kim was upbeat about the Philippine economy. He said that while the bank downgraded the forecast for overall global growth from 3.2 percent to 2.8 percent, it did not do so for the Philippines.

“We think it’s going to hold steady at around 6.4 percent, with a lot of upside going into the future,” Kim said.