The glory that is Ephesus’ 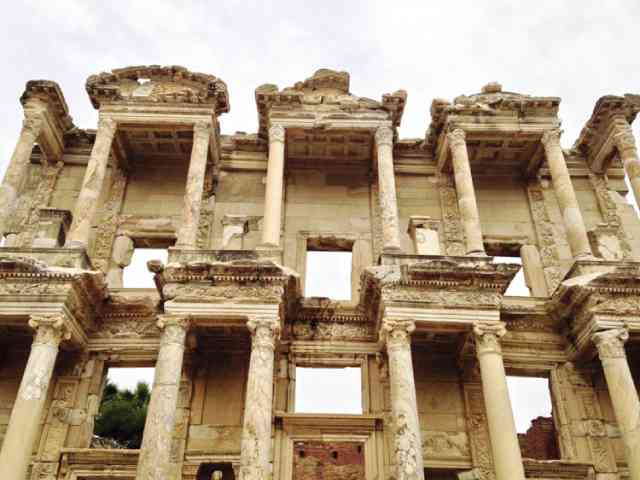 THE IMPRESSIVE façade of Library of Celsus is the most stunning in Ephesus. It housed some 20,000 scrolls and is considered to be one of the largest libraries of its time.

My summer was full of ruin. Well, ruins, that is. After writing about Pompeii two weeks ago, let me now introduce you to a little ancient gem called Ephesus.

Better known as Efes in Turkey, Ephesus is found in the province of Izmir and is recognized as one of the world’s most well-preserved ancient Roman cities. A walk through its ruins is a parade of clearly cut molding details, patterned mosaic floors, fluted columns and adorned capitals. Filling the missing pieces of the puzzle  in my mind, I could almost imagine the fragmented structures coming together into the grandeur they would have had in the height of their existence.

Little is heard of this Ionian settlement, first established in the 11th century BC, perhaps because its decline or loss had been less violent or dramatic than other ancient cities like Pompeii. First built along the river Kaystros (now called the Kucuk Menderes River) near the Aegean Sea, the city was eventually relocated to a mountain valley inland, and rebuilt with a nine-kilometer fortification.

For awhile, Ephesus was ruled by the Syrians and the Egyptians, until the Romans conquered it in 190 BC and made it the most valuable center of commerce, trade and banking in Asia Minor. It was during this Golden Age of prosperity that the many splendid structures were built. The city was destroyed when the Goths plundered it in 263 AD, after which Ephesus never regained its magnificence and prosperity.

But whatever remains of the city certainly speaks loudly of the its past glories: White Greek and Turkish marble structures rise against the landscape of the valley, and fragments of structures, with all their intricately carved detail, litter the site so abundantly  that there is so much to be appreciated with every step of their marbled walkways. The whiteness lends an elegance to the ruins. After experiencing the beauty and detail of Ephesus, the Roman Forum, in my mind, has now been reduced to a pile of rubble.

Prominent in this Ephesian landscape is the Great Theatre of Ephesus, with 25,000 seats and a diameter that stretches 50 meters long. Musicals, plays and even gladiatorial combat were performed here. Today, the theater seating looks nearly as it was thousands of years ago, with its details like arches, cornices and ornaments missing but to be found somewhere among the hundreds of building fragments that lie on the ground, yet to be pieced together. 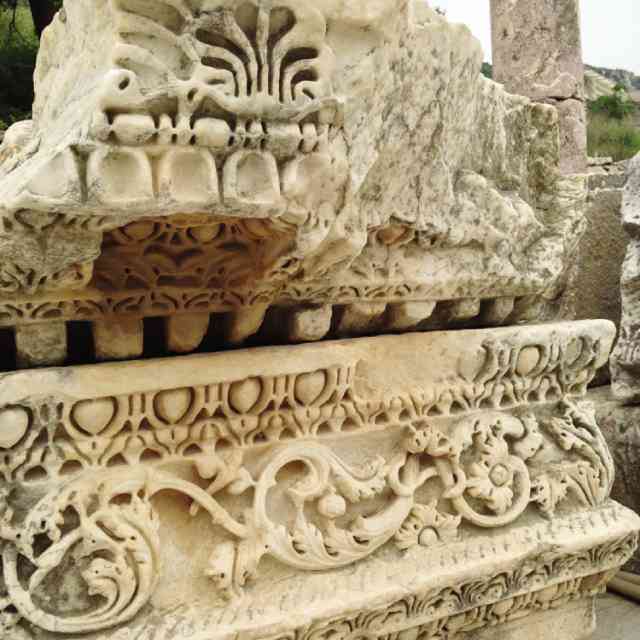 FRAGMENTS of structures litter the site so abundantly with all their intricately carved detail. There is so much to be appreciated with every step of Ephesus’ marbled walkways.

Two-story homes for the wealthy, with courtyards or atriums, were built terraced on a hillside. These were laid out much like today’s homes—living and dining spaces on the ground floor and sleeping areas on the upper floor. Frescos adorned the walls inside, and on the outside, mosaic flooring in fancy patterns lined the streets that were exclusive to these privileged souls. Today, tent-like structures enclose the houses for protection from weathering.

The large Market Square, or the agora, is visible as a large colonnade-lined open space. Here, rows of shops lined three sides of this once-bustling marketplace. Adjacent to this is the intricately carved façade of the Library of Celsus that is absolutely the most stunning in Ephesus. It is a rather sizable structure constructed from marble, with richly adorned archways that framed the statues of their gods and goddesses.
Measuring some 20 meters deep, it housed some 20,000 scrolls and is considered to be one of the largest libraries of its time.

Aside from these, there are many other structures—or parts of—to  see: the public latrines with their very spartan yet purposeful architecture; the Odeon or small theater, housing 1,500 spectators and roofed as a concert and auditorium space; the Prytaneion or old town hall where public functions including banquets and receptions were held; the Pollio fountain; and the various temples devoted to the gods, including the richly decorated Hadrian’s Temple and the grand Temple of Artemis which is considered to be one of the world’s largest but now stands as one lone pillar.

Covered in alluvial soil for many years, Ephesus continues to be excavated and rebuilt for the world to see. If you find yourself in Istanbul, take a short plane ride to the city of Izmir for a day trip to experience it. Having been the fourth largest city of the Eastern Roman Empire, Ephesus still has so much glory to offer, even in its ruin.