MANILA, Philippines—Electricity rates will go up by around P0.03 per kilowatt-hour (kWh) in July for the average customer of the Manila Electric Co. (Meralco), according to the power distribution firm.

That amounts to an additional P6 in the power bill of a household consuming 200 kWh for the month of July.

Meralco said this upward adjustment would come after two straight months of lower power rates, for a combined reduction of P0.89 per kWh (P0.05 per kWh in May and P0.84 per kWh in June).

Higher rates from energy suppliers plus transmission and other charges drove the slight increase in the overall power rate. However, a reduction in Meralco’s distribution charge mitigated the increase, the country’s largest distribution utility said. A favorable peso-dollar rate coupled with cheaper coal prices also tempered the increase in generation charge, Meralco said.

The generation charge for July went up by P0.10 per kWh to P5.41 per kWh in July from P5.31 per kWh in June. This was primarily due to the P0.26 per kWh increase in the average rate of suppliers with power supply agreements (PSAs) with Meralco, as well as the P0.10 per kWh increase in the rate of Independent Power Producers (IPPs). These were partly offset by the P4.24 per kWh reduction in the average price of the Wholesale Electricity Spot Market (WESM), inclusive of line rentals and other adjustments, Meralco said. 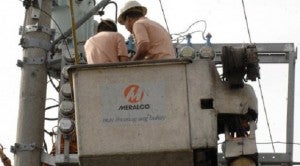 The resulting thin reserves brought about by these outages likewise led to frequent declarations of yellow and red Alerts for the supply month compared to the previous months, Meralco said. The grid, for instance, was placed on Red Alert for four hours in June due to various generation and transmission-related troubles. Yellow alert was experienced for 27 hours in June compared to only 25 hours in May, 8 hours in April and 6 hours in March.

Yellow alert is reached when the total reserve is less than the capacity of the largest plant on line. For the Luzon grid, this is usually equivalent to 647 MW, or one unit of the Sual Power Plant.

In terms of share to Meralco’s total power requirements for the June supply month, PSAs, IPPs, and WESM accounted for 53, 41, and 6 percent, respectively.

Contributing to the overall upward adjustment in the bills to households is the P0.08 per kWh increase in transmission charge. “According to the National Grid Corporation of the Philippines (NGCP), this was mainly due to higher ancillary charges, which accounted for around 40 percent of the total transmission cost for the July billing,” Meralco said.

There was also a cumulative increase of P0.002 per kWh in subsidies and the system loss charge. Taxes, meanwhile, decreased by P0.003 per kWh.

Mitigating the increases in the generation and transmission charges for a residential customer consuming 200 kWh is a P0.15 per kWh reduction in the distribution, supply, and metering charges of Meralco.  The lower Meralco charges will remain for the duration of Regulatory Year 2015 (RY2015), which is from July 2014 to June 2015.

Under the Performance Based Regulation (PBR), the annual revenue requirement, resulting indicative prices, and performance incentives have been approved before the start of the regulatory period from July 2011 to June 2015. Meralco said it has improved its service to customers by surpassing the standards set by the regulator. Due to this development, customers now experience lesser interruptions, lower system losses and faster customer response time.

Meralco reiterated that it has not earned from the pass-through charges, such as the generation and transmission charges. Payment for the generation charge goes to the power suppliers such as the plants selling to Meralco through the WESM and under the PSAs, as well as the IPPs. Payment for the transmission charge, meanwhile, goes to the National Grid Corporation of the Philippines (NGCP). Of the total bill, only the distribution, supply, and metering charges accrue to Meralco.