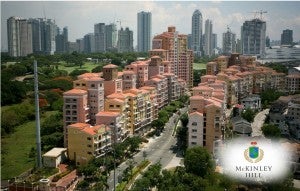 The investment in this township — which capitalizes on its proximity to the country’s most upscale subdivision Forbes Park — will be made in the next 10 years alongside the introduction by Megaworld of a new residential brand that will cater to a more discriminating market than the broader market segment that the property developer has mostly served over its 25-year history.

In a press briefing on Tuesday, Megaworld senior vice president Noli Hernandez said this township would have office and retail components alongside a residential component catering to the upper class A market.

“McKinley West’s masterplan highlights a luxurious blend of a modern business district and posh residential enclaves. We will live up to the lifestyle that the neighboring Forbes Park also offers,” Hernandez said.

In 2010, Megaworld sold 285 lots accounting for about a third of Mckinley West in an area designated for an exclusive village. From its selling price of P75,000 then, the lots in the upscale village are now valued at around P160,000/sqm.

“It has been four years since we sold out McKinley West Village, yet up to now, we are still receiving inquiries,” Hernandez said.

Aside from the residential village, he said McKinley West would have rows of luxury residential clusters – expected to be in low-rise and low-density structures – with some units having their own swimming pools, “state-of-the-art” security features and “first-of-its-kind” luxury amenities. These will adopt a “modern luxury” European theme.

The township will also have its own business park offering modern office towers as well as commercial and retail buildings. Construction of the business park will start next year.

With the development of McKinley West, Lawton Avenue, the main road fronting the township, will be expanded to six to eight lanes, through the efforts of the Bases Conversion and Development Authority (BCDA). The township will also have direct access to McKinley Hill, another Megaworld development.