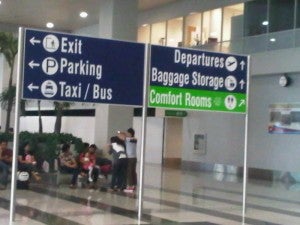 “We are confident that the contractor will meet the deadline. By the middle of June, the completion was at 85 percent. So far, we have not received a request for extension from the contractor,” Miaa general manager Jose Angel Honrado told reporters on Thursday.

Based on the timetable given by the contractor Takenaka Corp. of Japan, rehabilitation work, which included the baggage handling, flight information displays, computer terminals, gate coordination and fire protection systems at the Naia terminal 3 remained on schedule as of Thursday, the airport official said.

By August, the Naia terminal 3 will begin to accommodate five international air carriers, which will transfer their operations from the congested terminal 1. These are Delta Airlines, KLM, Singapore Airlines, Cathay Pacific, and Emirates Airlines.

“The basic amenities will be there by August 1,” he said noting that 24 additional brand new X-ray machines for baggage security check have recently arrived.

“What we just need are the people to man this equipment,” Honrado added.

The Terminal 3 is currently operating at half its annual capacity of 13 million passengers due to certain structural issues, which the Japanese contractor has addressed.

With the transfer of the five foreign airlines, the Miaa expects to accommodate 3.5 million passengers more per year, potentially decongesting the Naia Terminal 1, which is also undergoing renovation.

Honrado also disclosed the future improvement in the amenities of the Terminal 3.

“First there will be a four-level shopping area at the Terminal 3,” Honrado said.

The first two floors will house the Duty Free Philippines stores, while the third and fourth floors will be for clothing and retail stores and casual dining restaurants.

A paid transit lounge will also be put up for passengers waiting for their flights.

Asked about the issue of poor air-conditioning system at the Terminal 3, Honrado said corrective measures were still being done, as of Thursday.

He said the heat at the Naia terminal 3, particularly on the fourth floor, was mainly caused by the ongoing construction work.

“The solution is to have an additional air-handling unit. The funding has already been approved and the project is currently being bid out,” Honrado said.