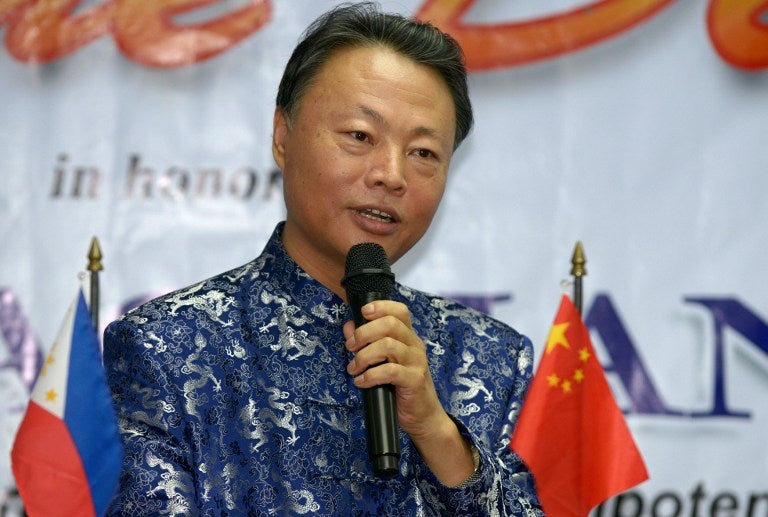 New Chinese Ambassador to the Philippines Zhao Jianhua speaks to businessmen in Manila on July 1, 2014 during a welcome dinner in his honor. The envoy urged the two countries, which are locked in a South China sea territorial dispute, to focus on working together on matters that will be mutually beneficial for both countries.   AFP

MANILA, Philippines — China and the Philippines should work to strengthen weak economic ties, Beijing’s envoy to Manila has said, despite an acrimonious maritime dispute.

“It is imperative and essential that the two countries focus (on) things that can unite us, focus on things that can promote common prosperity for both countries,” ambassador Zhao Jianhua told Filipino businessmen in a speech late Tuesday.

Manila accuses Beijing of illegally claiming South China Sea islets and waters within the Philippines’ continental shelf, and has asked a United Nations tribunal to declare the actions as against international law.

The speech did not touch on the maritime dispute, but Zhao observed that economic ties had lagged behind those between China and the rest of Southeast Asia.

It echoed President Benigno Aquino’s oft-expressed view that the South China Sea dispute did not constitute the “totality” of their relationship.”

Zhao said Filipino firms have invested more in China than Chinese companies have in the Philippines.

But Filipino farm exports to China were insignificant, and Chinese tourist arrivals in the Philippines were dwarfed by Chinese visiting Malaysia and Thailand.

But while Chinese firms invested more than $90 billion abroad in the same period, less than two percent of that reached the Philippines, Zhao said.

As the Chinese economy shifts from being “the world’s factory” to one led by domestic consumption, Zhao said manufacturers would move operations to Africa and other parts of Asia.

“There is a good opportunity for the Philippine side to receive some of our good-quality manufacturing investments,” he said.

Zhao said mainland Chinese tourist arrivals in the Philippines, which rose 70 percent to just under half a million people last year, were puny compared to Malaysia’s four million Chinese visitors and about three million to Thailand.

“Can you imagine if you attract one or two million Chinese tourists? That will instantly boost the tourism industry in the Philippines,” Zhao said.

“But we’re glad that despite the difficulties we’re having, the Chinese tourists are still attracted” to the Philippines.