US to slap record $8.9-B fine on BNP Paribas 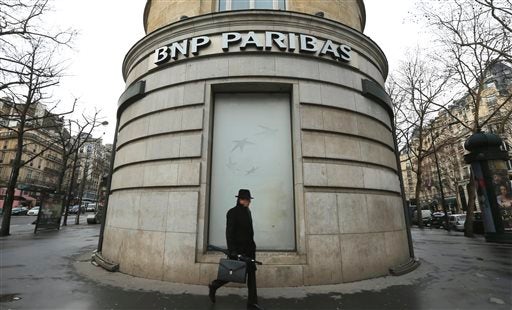 NEW YORK – French bank BNP Paribas has agreed to pay US authorities a $8.9 billion fine to avoid being tried in court for dealing with US-blacklisted countries, sources close to the matter told AFP.

The deal ends months of haggling which saw French President Francois Hollande pressing his US counterpart Barack Obama to intervene and lighten the punishment.

Agreement on the record fine, approved by the bank’s board of directors at a special weekend meeting in Paris, is due to be announced Monday after markets close at the New York Stock Exchange around 4:00 pm (2000 GMT).

At least $2 billion of the fine will go to Lawsky, who is temporarily suspending parts of BNP’s dollar-handling business in the United States — key to any major bank’s US operations — for all of 2015.

Sources said the suspension would take place progressively since BNP has operations underway.

BNP, France’s largest bank, has until December 31 to find a bank that agrees to make dollar payments on its behalf.

The deal forces BNP to plead guilty to the bank’s deals from 2002 to 2009 with countries that Washington has blacklisted like Cuba, Iran and Sudan.

The investigation probed more than $100 billion of transactions, finding that $30 billion of that amount were concealed in order to skirt the sanctions.

Too tough on BNP?

BNP has a strong enough capital base to handle the penalty, but the size of the fine and the temporary suspension of parts of its dollar-handling business — key to any major bank’s US operations — will mean a significant hit on its earnings.

BNP chief executive Jean-Laurent Bonnafe reportedly wrote to employees on Friday conceding the bank will be “punished severely,” but stressing that “this difficulty … will not impact our roadmap.”

US authorities have already forced BNP to dismiss three senior officials allegedly linked to the sanctions violations, including its chief operating officer.

Lower bank officials could also be fired as part of the settlement.

That would likely be a blow to the bank’s bottom line. In 2013 BNP reported total profits of 4.83 billion euros ($6.59 billion) on revenues of 38.8 billion euros. It has already set aside $1.1 billion to cover losses from the case.

BNP has been largely quiet about the allegations and potential penalties during months of negotiations.

Critics have accused Washington of being especially tough with foreign banks, and BNP in particular, while treating US banking transgressions more lightly.

In punishing US banks for financial crisis-related violations, negotiated fines have run into the billions but none has had to plead guilty, an act which could lead to the loss of a banking license.

None were forced to plead guilty or halt certain banking operations.

But US authorities have become much tougher on banks that are less cooperative in investigations.

In May, Credit Suisse pleaded guilty to helping Americans evade taxes and was fined $2.6 billion, over three times the $780 million fine US authorities imposed on fellow Swiss bank UBS for the same charges in 2009.

Analysts say the size of the BNP fine relates to the size of the business it did with Sudan and Iran, several times larger than that handled by ING and Standard Chartered.

The BNP controversy has been a thorn in US-France relations. French officials warned in early June that it could cause problems for the huge transatlantic trade treaty under negotiation between the European Union and the United States.

Hollande also raised the issue with Obama during a dinner in Paris.

Fabius said that Hollande had told Obama the case is “very important for Europe and for France,” saying if BNP is weakened it would “create a very negative interference in Europe and its economy.”

But even before the dinner, Obama had signaled he would stay out of a legal issue.

“The rule of law is not determined by political expediency,” he said.