(Editor’s Note: We are featuring remarkable people who turned “unthinkable” developments into reality and led companies that grew from humble roots to global recognition.)

He is a true industry pioneer. This was how Jules Kay, managing editor of Property Report Southeast Asia, described Century Properties Group founder and chair Jose E. B. Antonio as he received the 2012 Real Estate Personality of the Year at the Southeast Asia Property Awards in Singapore.

“Despite such high-profile developments, as a seasoned property professional he remains focused on quality…. He and his sons have been slowly transforming the Manila skyline, drawing the global spotlight not only in the Philippines, but also in the Southeast Asian region,” Kay said.

It is the visionary character in him that makes him see advantageous opportunities and optimistic possibilities beyond his time.

When most businesses were closing down, Antonio invested his savings in putting up Century Properties Inc. six days before the People Power revolution.

Already incorporated in 1983, Century Properties started operations three years later. It initially focused on marketing and sales for third-party real estate developments. This was the start of what would become one of the country’s five top real estate companies in terms of total sales value.

What used to be a company with a small office, humble capital and five employees is now a force to reckon with, bringing world-class real estate developments in the country. Its resilience amid five economic cycles attests to its strength as a professional and experienced organization.

Century Properties’ pioneering, innovative and best-in-class developments earned it a reputation as the industry game changer.

2The first to introduce the concept of fully fitted/fully furnished units that is now an industry standard in the country. Aware that many homebuyers are too busy to properly fit out or furnish their newly bought units, Century was the first real estate company to offer fully fitted and fully furnished units through its South of Market in Bonifacio Global City, Grand Soho Makati in Salcedo, Makati; and Soho Central in Mandaluyong.

3Made headlines through a differentiated branding strategy by striking unprecedented collaborations with world-class brands, architects, industry experts and international icons. Century worked with Pritzker Prize-winning architect I.M. Pei through Pei Cobb Freed & Partners for the design of Essensa East Forbes. Through the Pei Partnership, Century worked with I.M. Pei and his sons for The Centurion condominium in New York City. For the Milano Residences, it did the interior design with Versace Home. 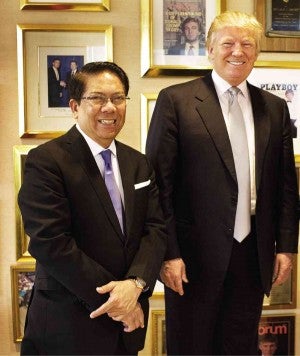 Century also collaborated with international celebrity and style icon Paris Hilton for the design of the Paris Beach Club at Azure Urban Resort Residences; GE Healthcare for Centuria; the Trump organization for Trump Tower at Century City; MissoniHome for the interior design of Acqua Livingstone residences; and with the firm Yoo inspired by Starck of John Hitchcox and Philippe Starck, for Acqua Iguazu residences.

More recently, the company announced partnerships with Forbes Media in New York to build the Forbes Media Tower office building, which will be the first of its kind in the world; and the renowned architect Daniel Libeskind and Armani/Casa for Century Spire, a 60-story residential-office building. Both towers are rising at Century City, Makati.

• Acqua Private Residences. Comprising of six towers, this residential Eden development will feature a country club by the water concept, with fitness, leisure and recreational facilities. A riverwalk promenade will feature cafés and boutiques that will be open to the public.

• The Residences at Commonwealth by Century. Century’s 4.4-hectare development for the affordable market in Quezon City features a holistic and nurturing environment, with innovative amenities for every member of the family.

Antonio believes in leadership by example and in a management style that is less bureaucratic and less formal.

He said: “These days, we encourage more collaboration and cooperation. In the office, I endeavor to be open to all stimuli. The success of my organization comes from a collaboration of ideas from very talented and dynamic individuals, including local consultants and global partners. We believe in sharing our knowledge, wisdom and experience with the other members of the management team.”

That sort of leadership tends to pay well, especially given the improvements to Century’s bottom line. In 2013, Century hit P24.6 billion in reservation sales, the highest level in a single year since it became public in 2012 and in its 28-year history. Its 2013 revenues also reached a record high of P10.8 billion, a 12.5-percent increase from P9.6 billion in 2012.

In terms of awards, Antonio has had a fair share, including a Lifetime Achievement Award from Harvard Business School in 2007; the CEO Excel Award from the International Association of Business Communicators in 2010; and the Real Estate Personality of the Year Award in 2012.

Century’s recent accolades are from the International Property Awards 2012, for its Trump and Milano Residences projects, which won the Best Residential High Rise and Highly Commended Architectural Design, respectively. It is also a consistent placer among the Top 10 Philippine Real Estate Developers of BCI Asia and has won the CFI Award in 2013 for the Best Premier Residential Real Estate developer in the Philippines. 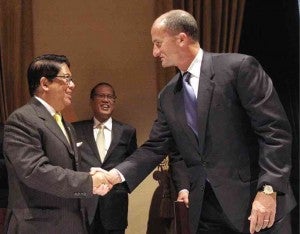 Vision for the Philippines

Antonio has always been passionate about highlighting the Philippines as a world-class destination for investors, tourists and homebuyers.  He talked about the positive growth and business opportunities in the country in prestigious news channels like CNN, BBC, Bloomberg Television and CNBC News Asia, and in various forums including the Euromoney Conference and The Asset Finex Forum, both in 2013.

His success story was published in 2013 in Forbes Asia, which commended him for bringing “a combination of glamour, glitz and brand names never before seen in the country nor even in much of Southeast Asia.”

“We endeavor to create innovative and excellent projects because these contribute to the positive transformation and boost the competitiveness of our country,” Antonio said. “In a way we also showcase the Filipino talent to the world; that we can deliver world-class developments, which are the very essence of cosmopolitan cities.”

Jose Antonio is indeed a management whiz who transformed Century from a marketer of third-party real estate developments to a worldwide property powerhouse.