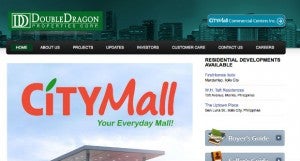 MANILA, Philippines–Property developer DoubleDragon Properties Corp. will start offering this week leasehold rights for its upcoming Dragon8 Shopping Center in Divisoria, a new retail project that can raise as much as P1.33 billion in fresh revenues from the sale of such leasehold rights to “tiangge” store operators.

DoubleDragon, which aims to make Dragon8 a “vibrant gateway to Divisoria,” expects to bring to the market 627 tiangge slots with average cuts of seven square meters each, according to DoubleDragon chair Edgar Sia II.

“It’s a great way to re-introduce Divisoria to all value conscious people around the country,” he said.

Potential tiangge operators will have to purchase the leasehold rights for the regular units at a cost of P1.4 to P1.6 million, but some bigger cuts will cost P2 to P2.5 million per slot, Sia told the Inquirer.

The standard arrangement is apart from the upfront payment of leasehold rights. Buyers will also have to pay monthly fees, lease and utility costs—a type of arrangement which is very unique to very prime retailing sites in Divisoria and Baclaran.

“We are glad that DoubleDragon was able to secure one of the most prime corner half-hectare sites in Divisoria that will soon become Dragon8 Shopping Center,” Sia said.

Sia said DoubleDragon was excited with the inquiries about Dragon8 so far, adding that the tiangge slots should be ready for use by the last quarter of the year in time for the Christmas rush.

“Maybe [it’s] something to make many housewives happy,” he said.

“We expect the non-Divisoria goers to start going to Divisoria again once Dragon8 Shopping Center is open, because of over 600 safe, covered parking slots. With the same budget, they can get a lot more in terms of quantity in Divisoria,” he said.

Because DoubleDragon has combined some store slots to create bigger cuts while making space for a big food court on the third floor, the final tiangge slot count has been pared down to 627 from 1,099 previously.

DoubleDragon expects to be able to sell leasehold rights to some of the thousands of tiangge locators who were displaced by the recent fire at Tutuban and Divisoria Mall buildings.

“The total expected revenue for the upfront sale of the tiangge slots leasehold rights if all will be offered for sale is P1.33 billion,” Sia explained.

“The selling price of Dragon8’s tiangge slots is aligned with the market pricing in the area except that instead of the usual 15-year leasehold rights term, Dragon8 will be offering its leasehold rights for 16-year terms and upon expiry DoubleDragon may resell again for another 16 years,” Sia said.

This new project is undertaken by DoubleDragon outside of the community mall ventures of subsidiary CityMall Commercial Centers Inc., which aims to set up about 100 community malls by 2020 under the “CityMall” branding.

Sia said DoubleDragon intended to make Dragon8 the “most vibrant” shopping center in Divisoria and contribute in attracting more shoppers to the bargain shopping capital of Manila.

“People there are saying that many rich people still continue to quietly buy their things there from time to time when they feel the urge to go on bargain hunting. We hope that with Dragon8, soon more and more people will again visit Divisoria,” Sia said.

“We also hope to give more people a venue to start their new business ventures there,” he added.