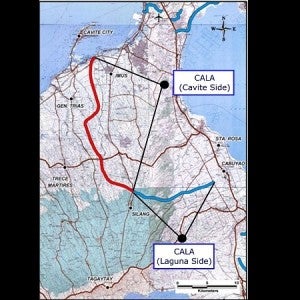 The joint venture between Ayala Corp. and Aboitiz Land Inc. offered a premium payment of P11.659 billion, the highest bid for the Cavite-Laguna Expressway (Calax) public private partnership (PPP) deal Friday, edging out two other groups for the coveted infrastructure project, bidding results at the Department of Public Works and Highways showed.

But Friday’s event took an odd twist as officials of San Miguel Corp., which was disqualified days earlier due to a deficiency in its bid security, took the unusual step during the financial proposal opening to announce their premium offer of P20.105 billion, while again raising the likelihood of a legal protest that could stall the PPP deal.

Because SMC’s Optimal Infrastructure Development Inc. was disqualified, its financial bid was not opened within the premises of the DPWH, which is implementing the P35.4-billion toll road project aimed at spurring development in provinces south of the capital district.

The two other bidders are MPCALA Holdings of the group of businessman Manuel V. Pangilinan and MTD Capital of Malaysia, the only foreign group. MPCALA Holdings offered P11.33 billion while MTD offered P922 million, their bid submissions showed.

Both were also premium payments, meaning these will come on top of the cost of the tollroad, which the winner will build and operate for 35 years.

Despite the specter of a lawsuit, PPP Center executive director Cosette Canilao said they would proceed with the project and likely render an award next week. This would make the Calax the third PPP project of the DPWH to be awarded after the Naia Expressway and Daang Hari-SLEx road project last year and in 2011, respectively.

Canilao, who is a non-voting member of the DPWH bids and awards committee, also stood by the decision to disqualify SMC on a technicality.

The issue centered around Optimal Infrastructure’s bid security, which expires on Nov. 25, or short of the 180-day requirement by only four days. SMC said its issuing bank ANZ later clarified the matter with the government.

On the surface, the decision to invalidate Optimal Infrastructure’s bid over those four days denied the government an additional P8.45 billion windfall, but Canilao said the rules had to be implemented to the letter.

“We have to protect the integrity of the process and the program. We look at the bigger picture rather than just this particular project,” Canilao said.

San Miguel, however, does not see it this way and Raoul Romulo, the authorized representative of Optimal Infrastructure, told reporters they planned to study and pursue all legal avenues so their bid would be considered.

“The [country] and the DPWH would have been the alternate beneficiary here. Unfortunately, because of a mere typographical error, which they have allowed in the other bids, we were not given that leeway. It’s a sad day for us but we hope that the remedies will see us through,” he told reporters.

Canilao, on the other hand, hoped SMC would not take this route.

“We hope they will reconsider their plans of filing a legal case because SMC is a partner of the government in several infrastructure projects and there are still a lot of PPP projects in the pipeline they would be interested in,” Canilao said.

The Calax project involves the financing, design and construction, as well as operation and maintenance of the four-lane expressway that will connect the Manila-Cavite Expressway (Cavitex) and the South Luzon Expressway (SLEx).