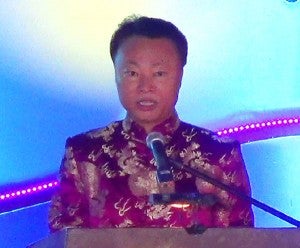 MANILA, Philippines—Malacanang on Wednesday dismissed insinuations that China is touting its economic prowess as a warning to  trade partners and territorial rivals.

“That doesn’t mean that just because China is investing in this country,  (it should) stop us from asserting or filing an arbitration case against them when it comes to our EEZ (exclusive economic zone),” Presidential Spokesperson Edwin Lacierda said.

Chinese ambassador Zhao Jianhua’s message at the Filipino-Chinese Friendship Day celebration at Manila Hotel on Tuesday evening was seen as a positive sign of continuing civil relations between Beijing and Manila.

During his speech, however, he mentioned the high levels of trade and investment that China has with the Philippines.

“China is the third largest trading partner of the Philippines…And in the first quarter of this year, the two-way trade of our two countries reached $12.5 billion, which increased by 14.6 percent on a yearly basis,” Zhao said.

But Lacierda pointed out that there are “different levels of exchange” between the two countries, which they may still pursue amid the territorial row.

“With respect to South China Sea, we have made a stand. Let’s resort to arbitration. This cannot be done in any other way,” he said.

The spokesperson also said that the Philippines continues to draw support from strategic partners and the rest of the international community.

In addition to trade, Zhao expressed hope that the “difficulties” faced by the two countries are just temporary, especially compared to their “thousand-year-old friendship and extensive cooperation.”

“The Chinese government has always attached great importance to its  relationship  with the Philippines, and I believe that we have  the  wisdom,  the  patience and  the  courage to settle the disputes through negotiations and consultations,” he said.

For his part, Lacierda said he welcomes China’s supposed “change of tone.”

He, however, pointed out that they would still have to wait for the statement of the foreign ministry of the People’s Republic of China, which has been active in responding to Philippines actions on the territorial disputes.

“Hopefully, they will also share the same kind of change of tone as the Chinese ambassador spoke yesterday,” he said.

Read Next
UCPB vows transparent bidding process
EDITORS' PICK
IATF to LGUs: Issue ordinances vs attacks on frontliners, COVID-19 patients
Diokno to Duterte: OK to make fun of buck tooth, but focus on people’s needs first
10 Filipinos positive for COVID-19 in UK, 7 in Ireland — envoy
Nograles: Cabinet members to donate 75% of monthly salary to aid COVID-19 fight
Robredo spox thanks Duterte for defending VP’s efforts vs COVID-19
Quick chat with Nicole Andersson: ‘You really don’t need much to be happy’
MOST READ
Coronavirus hotbed Rizal to shut borders on April 6
ADB warns PH against prolonged lockdown
Sotto on Isko Moreno’s call: We do our job without the media following our every move
‘Money Heist,’ ‘Tales from the Loop,’ ‘Killing Eve,’ ‘Never Have I Ever,’ ‘After Life’: Five not-to-be missed series this April
Don't miss out on the latest news and information.