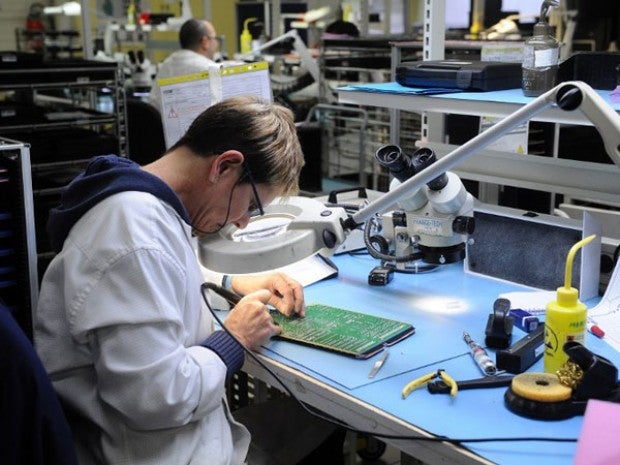 Seipi president Dan Lachica reported, however, that exports of electronic products fell by 2.5 percent to $1.82 billion in April from the $1.86 billion recorded in the same month in 2013 due mainly to a  decrease in export volume of several categories.

Compared to the previous month, the April export sales reflected a 16 percent decline from the $2.17 billion receipts posted in March.

As of end-April, cumulative exports of electronic products registered a 4.85 percent increase to $7.64 billion, as against the $7.29 billion recorded a year ago.

“Only two electronic products posted a negative growth, namely components/devices (semiconductors) at 13 percent and automotive electronics at 43 percent. The remaining seven sectors grew by 340 percent,” Lachica reported. For other electronics, cumulative exports surged by 72.75 percent to $488.16 million in the first four months of the year, from the $282.58 million a year ago.

For 2014, Seipi said it was maintaining its modest 5-percent growth projection for electronics exports. This expected recovery in the industry’s export revenues may be attributed to the growth in demand, particularly for the automotive and consumer electronics, as the global economy improves.

Read Next
EU says Philippines, PNG face import ban over illegal fishing
EDITORS' PICK
Gear up and get ready to play with Yamaha Mio Gear
PH to import 60,000 tons of fish to cover shortage
#VotePH2022: COVID, power woes loom as poll concerns
Over 3 Million worth of prizes to be won at Smart Padala’s SENDali Manalo Promo!
Workers are exempted from ‘no vax, no ride’ policy – DOLE chief
Acer starts the year off strong with the Aspire Vero National Geographic Edition
MOST READ
1Sambayan names 7 aspirants in its 2022 Senate lineup
Cold-case investigation names surprise suspect in Anne Frank’s betrayal
Guevarra to Acosta: Obey rules on unvaccinated
Emma Stone calls Andrew Garfield a ‘jerk’ after he ‘lied’ about his ‘Spider-Man: No Way Home’ appearance
Don't miss out on the latest news and information.